The RB brands are on ground at the holy Simhastha Kumbh Mela in Ujjain, to raise awareness about hygiene and sanitation, adhering to the ‘Swachh Bharat’ initiative’ 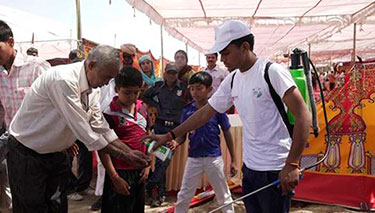 The RB brands are on ground at the holy Simhastha Kumbh Mela in Ujjain, to raise awareness about hygiene and sanitation, adhering to the ‘Swachh Bharat’ initiative’

The antiseptic solution Dettol and toilet cleaner Harpic, both brands of the British multinational RB (previously Reckitt Benckiser), are visible at the holy Simhastha Kumbh Mela in Ujjain, Madhya Pradesh. The brands are playing good corporate citizens and doing their bit for the ‘Banega Swachh India’ initiative, by helping spread awareness about hygiene to the assembled Sadhus, sages and pilgrims.

Dettol, a household name in India as a quick fix for cuts and sores and for ensuring hygiene, partners with the Simhastha Kumbh, after being a successful partner at the Haridwar Ardh  Kumbh Mela earlier this year. Now, the toilet bowl cleaning solution brand, Harpic, too has joined hands with Dettol for the Simhastha Kumbh at Ujjain to spread awareness about hygiene and sanitation to many more pilgrims and ascetics gathered there.

Held every twelve years and considered among the world’s largest religious congregations, the Simhastha Kumbh Mela’ takes place between April 22 and May 21, 2016. Almost five crore pilgrims are expected to assemble at the Madhya Pradesh town for the spiritual event from across the country.

Such a mass gathering will not only impact the availability of water as demand shoots up, but also deplete precious minerals naturally present in the water supply system. The brands Dettol and Harpic intend to reach out to pilgrims and educate them about the ill effects of open defecation and the importance of washing hands, in keeping with their commitment to the ‘Banega Swachh India’ initiative of the Union government.

On ground volunteers have been deployed at strategic locations with efficient water sprayers and sanitisers. They are present at food centres, bathing areas, eateries and toilets to ensure that people wash their hands before eating their meals and after using a toilet. Nearly 100 toilets will be maintained by Harpic as a solution to the menace of open defecation.

The volunteers will also be distributing informative material through flyers to pilgrims and ‘Sadhugrams’ to raise awareness about healthy habits like washing hands. Radio channels are being used extensively to preach the importance of hygiene through jingles, which have already proved effective in instigating people to wash their hands.

Speaking about the initiative, Nitish Kapoor, Regional Director, RB South Asia, said, “As a global leader in consumer health and hygiene, our purpose is to improve hygiene and sanitation in the daily lives of our consumers. Kumbh Mela is the largest congregation of humans anywhere on earth, which poses a huge challenge for sanitation because of the temporary influx of people in vast numbers. After successfully raising awareness amongst 30 million pilgrims at Nashik Kumbh last year, RB is proud to partner with Simhastha Kumbh Ujjain to drive a positive behaviour change towards a Swachh Bharat.”