Sons of Vikrant: Bajaj and Leo Burnett weave a touching story of our naval veterans 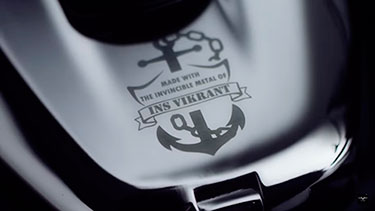 Sons of Vikrant: Bajaj and Leo Burnett weave a touching story of our naval veterans

Right after moulding bikes from the scrap metal of the legendary aircraft carrier INS Vikrant, Bajaj Motorcycles has partnered with Leo Burnett India to weave in a single thread the stories of war veterans who have served on the first of its kind ship in the Indian Navy’s fleet.

The documentary was screened at an event in Mumbai on Thursday evening, attended among others by stalwarts of the advertising industry, making for an impressive audience for the film.

Bajaj Motorcycles had bought out some parts of the metal from INS Vikrant when it was commissioned for scrapping. The two-wheeler giant decided to mould this metal into the bodies of the new motorcycle model, ‘Bajaj V, The Invincible’. The company made a conscious decision to launch the teaser campaign for the new bike on January 26, 2016.

The buzz was huge and sales of the motorcycle model have been impressive. But, what exactly drove Bajaj to go a step ahead and make a documentary with the war heroes?

Sumeet Narang, VP, Marketing (Motorcycles), Bajaj Motorcycles, said that it was very much needed to take ahead what they had started off with. He explained, "You need to go much deeper with a subject like this that demands a lot of sensitivity and reverence. Hence, we got into delving deeper into Vikrant and talking to people who worked on it. It is then that we realised that there is so much to the ship which can be told. Since we started this thing, we realised that the onus was also on us to bring these stories together. As we started meeting people – it was such a passionate subject – one officer helped us in meeting another; it became as if we had launched a search for people associated with Vikrant."

It took a couple of months for the auto giant and Leo Burnett to really delve deep into the stories born on the INS Vikrant and build them into a precise piece of video.

Saurabh Varma, CEO, South Asia of Leo Burnett, sharing his view on the idea behind the documentary, said, “We had already launched the concept on January 26 and then we found that there exists a lot of beautiful, passionate and incredible stories. When we started meeting the people involved in the 1971 war, we realised that these stories needed to be told. We met many people and the footage ran into hours, which we had to bring down to 16 minutes.”

The industry stalwarts and veterans from the ad world who were present at the screening applauded the documentary and the initiative and idea of making the film.

Nakul Chopra, CEO, Publicis South Asia, said, "It was a good initiative. But one thing that I'd like to say is that 90 per cent of Indians don't know the true value of defence personnel. And that lacked here. In Goafest, people gave a standing ovation to Arjuna Ranatunga, while here the real heroes were barely given a standing ovation. That shows the lack in respect for defence people."

So, having created a film touching the emotional chords of Indians, will the brand use this documentary to bring traction for the bike? It is sure to create further buzz around the new product, the brand and the company on the back of this film.

Verma said, “There will be shorter promos of the documentary, while the complete film will be telecast on social media and will also be played on select TV channels. We already have TVCs running with real shots of Vikrant being pulled down. The TVCs are the first prototype that we built.”

This documentary, he suggested, is part of the huge integrated campaign which is and will be built around the Bajaj V. “We genuinely hope that this creates impact in the marketplace and tells the story of the heroes who are behind the V. It is our job that these stories get played.”

Narang, however, would like to keep the documentary as a documentary, not really relating it to the new brand. He said, "TVCs are different. I don’t think this documentary is subject for a TV advertisement for our product. It will be available on digital platforms and it is open for TV screening also; if the channels are interested and they approach us, we will be willing to do that."

It’s not a limited edition bike as the company has enough metal for lakhs of bikes and it is not running out any time soon.