The ad club award lauded the channel for its on-air campaign, ‘Colours of Chennai’ 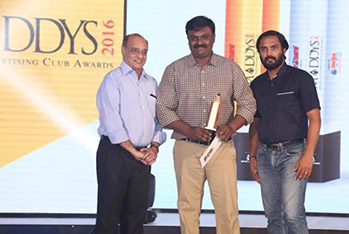 The ad club award lauded the channel for its on-air campaign, ‘Colours of Chennai’

94.3 Radio One Chennai, which was the first radio station in Chennai to become a 100 per cent Bollywood station, won an award at the prestigious ad club awards in Chennai -The Maddys2016 - for its on-air campaign ‘Colours of Chennai’.

The on-air campaign was designed to involve the listeners of Radio One and to create a high level of live interaction of what the colour or nuances of Chennai were and how this had now changed to become a city that accepts global cultures and progress. Listeners spoke of the changes they desired, which was followed by an online theme, ‘LoveTheChange’.

The campaign set the tone for the station’s bold move to become ‘Chennai’s first Bollywood station’. The campaign helped listeners embrace the need for choice and that Chennai was ready to accept the different colours of tradition and progress, all at once.

John Justin, Station Director, Radio One, Chennai, said, “It was a moment of great pride for my team and me to be recognized by the professionals at the Maddysand that our team came up with this unique and insightful idea that helped us make a challenging transition to a smooth one. It was really wonderful to see the contribution from our listeners and their whole hearted acceptance to the new Bollywood format. We are proud that we are 100 per cent Bollywood, 100 per cent Chennai.”

Vineet Singh Hukmani, MD and CEO, Radio One, said, “Our differentiated formats in every market have helped us cement our place in the minds of the tribes we target and we have achieved the same feat once again in Chennai. Even though the overall radio market in Chennai has dipped eight per cent to nine per cent over last year, Radio One Chennai has grown 31 per cent in the fourth quarter, compared with the same period last year and this is proof that doing things differently and doing them first is our route to success. We are thankful to listeners and advertisers who have supported us in this journey and we promise that we have many more innovative activities that will bring cheer to them in the near future.”

Recently Radio Jockey (RJ)Sulabha at Radio One, Chennai, won the bestRJ award among all the radio players in Chennai at the prestigious Ananda Vikatan awards for 2015.

“We are progressing on the Bollywood front by also launching Chennai’s first ever ‘Shahrukh Khan film festival’, by choosing his greatest fan from amongst our listeners with a fabulous on-air and social media activity.  All this will bring in the new Shahrukh Khan starrer fan to life in our wonderful city,” added John Justin.