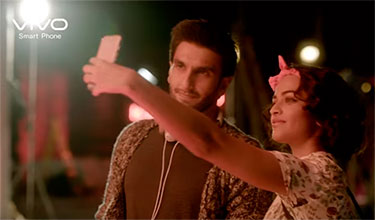 Built around the theme, ‘Faster than Faster’, the campaign highlights some fast features of the smartphone, pointing to its better RAM space and 4G offering. Bollywood actor Ranveer Singh, known to have a fan following among the youth, should help the brand reach out to its target audience.

The TVC begins with a girl calling out to Ranveer Singh for a ‘selfie’ as he passes by.  As they pose, the girl’s camera is still opening. When the actor asks her, “You done?”, the girl is still trying to activate her phone’s camera.

“Wait,” she says, “the camera is opening...” The actor then flicks out his Vivo smartphone, takes a selfie and uploads it on social media. His fan’s camera is still in the process of opening…In a fun twist to the story-line, the film shows how the actor’s post makes the girl an instant celebrity. Legends of the fast features of the smartphone, Vivo V3Max, flash in the backdrop and the commercial ends with the tagline, ‘Faster than Faster.’

Commenting on the new campaign, Alex Feng, CEO of Vivo India, said, “It gives me immense pleasure to announce the launch of our innovation, the V3 and V3 Max for the Indian market. The V series designed with creativity and equipped with state-of-the-art technology will be a landmark for Vivo India. And we are truly delighted to have Ranveer Singh as the face of Vivo in India. Ranveer enjoys a huge fan following amongst the young Indian audience and Vivo being the brand for the youth, this lethal combination is all set to create magic in the Indian market. The campaign also looks young and fresh and we are confident that it will help the brand grow to the next level.”

Commenting on the creative thought behind the campaign, Arun Iyer, Chief Creative Officer, Lowe Lintas, said, “The features that make Vivo V3 and V3Max exceptional were many but the ones that particularly stood out and provide the brand its ethos were fast speed, huge memory and being an able ally of the youth. Youth sensation Ranveer Singh beautifully encapsulates these attributes in his unusual style and manages to establish a strong brand connect. Filmmaker Dibakar Banerjee has done a wonderful job in bringing these moments to life in a manner befitting the brand.”

The campaign will first be launched in the digital space, before being integrated with other mediums. The fully integrated campaign will be visible on offline mediums like print, television, outdoor activation and so on.