The partnership brings a broadcaster and a digital news portal together. The joint venture will initially provide business news on the digital platform and expand it later to television 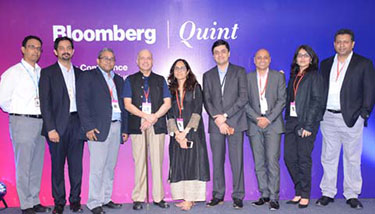 The partnership brings a broadcaster and a digital news portal together. The joint venture will initially provide business news on the digital platform and expand it later to television

Bloomberg TV has partnered with Quintillion Media to form BloombergQuint. The partnership intends to provide business news across both the digital platform and on television. A broadcaster and a digital news portal have joined hands for the first time to be a disruption in the news space.

While spokespersons of both the companies refused to share details on stakes, Bahl mentioned that it will be dependent on the regulatory approvals. However, it is learnt from industry sources that the two companies will share stakes in the ratio of 26 per cent and 74 per cent, with Bahl getting the bigger share, since (technically) the foreign partner is not supposed to own more than 49 per cent stake.

Speaking of how different business news was two decades ago, Raghav Bahl, Founder of Quintillion Media, said, “At that time, Star and NDTV were together. But today, there is space for another channel. It is a new offering and a new brand. There is need for disruption and BloombergQuint will do that.”

The website, ‘bloombergquint.com’ is scheduled to be launched in the first week of May. The television channel will take another six months to take off, since it is subject to regulations and licenses from the respective authorities. Not only will they focus on digital news and television broadcast, BloombergQuint will also do live events. Globally, Bloomberg does a lot of events and wants to extend this property to India too, along with other new ones.

Bahl said the team would recreate the space and be the DNA of the digital first generation. “While Quint has garnered a lot of eyeballs from the younger generation, BloombergQuint is looking at a slightly older age group of between 25 years and 75 years. However, we will try our best to attract younger audiences as well.”

Parry Ravindranathan, Managing Director, Bloomberg Media International, justified launching BloombergQuint in India first. He pointed out that India had a booming media and a population that made up about a sixth of the world. While the portal might be metro centric, it does not intend to be so. It will be a national product, available for everyone.

The portal will focus on business news and will roll out a lot of it. Since the portal is a global platform, there will be news from different parts of the world, beginning of course, with the Indian market. “The strategy is to create compelling content for both the platforms,” Ravindranathan said, adding, “We will create common content for the two platforms, with marginal differences.”

BloombergQuint is likely to take a more digital approach in its marketing and will, of course, take advantage of its existing platforms. The platform will be open to advertisers from the start. “We are entering the non-linear platform. The diving line is not TV vs digital, it is static to mobile, linear to non-linear and from family viewing to individual (personal) viewing and we want to enhance the personal viewing experience,” Bahl said, adding, “Plus, The Quint is an example of the importance of the digital platform. We didn’t invest a single paisa out of the digital space for marketing and it has done wonders for us.”

Bahl is confident that BloombergQuint would restore journalism at its core and that the strong values from his days with Network18, would take his venture to the next level.

In conversation with Raghav Bahl: