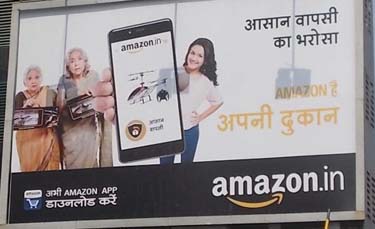 According to a recent out-of-home (OOH) third party monitoring agency, Time Outdoor Monitoring, e-commerce major, Amazon.in was the largest spender in the OOH medium in the first quarter of 2016.

All mediums of communication are an important part of marketing, OOH being one of them, especially when we know that a lot of people spend time travelling by road. The agency tracks OOH spends, monitors outdoor campaigns and tracks the effectiveness of spends. The report is based on pan - India analysis across 42 cities and shows the top ten OOH spenders in the months of January, February and March.

(*The data does not cover transit media airport, malls, inside railway stations and kiosks. Rates are indicative figures, subject to negotiation.)

Apparently, all the online traffic had come from offline advertising. Ecommerce giants like Amazon.in and Flipkart.com are a part of the list of brands that have spent Rs 10.39 crore and Rs 8.12 crore respectively, on out-of-home advertising.

During this busy tax period, DSP Blackrock Tax Saver Fund left no stone unturned in its OOH promotions, ranking only second to Amazon.in, with spends in the region of Rs 9.99 crore. Telecom major Airtel focused on 4G, with spends of Rs 9.72 crore for the quarter, while competitor Vodafone is yet to make it to the top 10 spending list.

Automobile major, Maruti Suzuki, which is a regular in the top 10 list of big spenders in the OOH space, is there this time for its newly launched four-wheel drive, Vitara Brezza, with spends of Rs 8.91 crore against Hyundai which had spent of Rs 7.44 crores. Two- wheeler giants Honda had its two brands; CB Shine and CB Hornet 160R in the top 10 lists, with ad spends in the region of Rs 8.77 crores and Rs 7.82 crores respectively.

Aakash Institute from the educational institute category made it to the top 10 lists, with ad spends of Rs 7.03 crores. Smartphone maker, iPhone 6s spent about Rs 6.98 crores with its popular ‘shot by iPhone campaign.’

(*The data does not cover transit media airport, malls, inside railway stations and kiosks. Rates are indicative figures, subject to negotiation.)

Public service awareness messages, showrooms/shopping malls, schools and colleges, educational institutions, four-wheelers (cars), hospitals/clinics and political parties made it to the top 10 categories lists. As much as 2.41 crores square feet of space went unutilized as no brands were advertised.