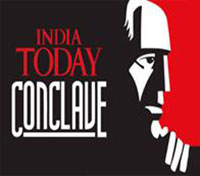 The India Today Group's signature event, ‘The India Today Conclave’, will be held in the capital on March 17 and March 18. The 2016 conclave explores the concept of ‘Powerplay’, challenging tried and tested notions of power and play and reinforcing the idea that the future belongs to those who dare to mix strength with subtlety, inspiration with imagination and passion with playfulness.

Speakers at the conclave include Nobel Laureate, molecular biologist and gerontologist, William Henry Andrews, RSS Joint General Secretary, Dattatreya Hosabale and Olympic champion and shooter, Abhinav Bindra. Started as part of India Today’s 25th anniversary in 2002, ‘The India Today Conclave’ was designed as a meeting point for the best minds from India and around the world to map the geopolitical and economic future of the country.

The conclave will provide an open platform for communication among experts from around the world, like thought leaders who analyze the times, politicians who determine media headlines, policy makers who shape the country’s future, or entertainers who add star power to our mundane existence. Star speakers will debate how we will live, eat, work, entertain ourselves and what the future will look, taste and feel like. The signature event aims at charting a bold new future through free and honest exchange of ideas, by bringing together the brightest thought leaders with their ideas, arguments and experiences.

Speaking on the occasion, Conclave Director, Kalli Purie, said, “This edition of the India Today Conclave is firmly rooted in this millennium and looks ahead rather than at the past. The multi-sensory experience across two days will introduce new ways of communicating, interacting and debating. You will get an opportunity to listen to bright minds and discuss new ideas with old hands; indulge in mobile movie premieres, enjoy book signings from our author speakers, hear both sides of the story with our line of peace dialogues, indulge in some gourmet delights with our special menus, brush shoulders with the best global thought architects and most of all be inspired! Along with a powerful thought flow, the two-day event will also present curated sensory experiences and spell-binding performances by leading change makers that will surely make your participation at the conclave memorable.’’

The speakers at the ‘India Today Conclave 2016’ will be: