A new Krishi Kalyan Cess (KKC) has been introduced at 0.5 per cent, increasing the service tax from 14.5 per cent to 15 per cent. This tax is applicable from June 1, 2016 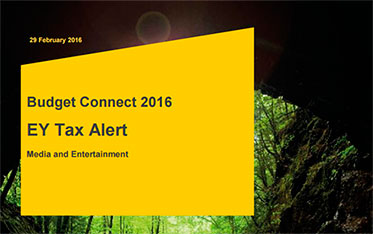 A new Krishi Kalyan Cess (KKC) has been introduced at 0.5 per cent, increasing the service tax from 14.5 per cent to 15 per cent. This tax is applicable from June 1, 2016

EY, the global professional services organisation, has decoded the Union Budget 2016 for the media and entertainment industry.

Key highlights of the Union Budget:

No changes have been made in the corporate tax rate, but an exception has been made for domestic companies with a turnover not exceeding Rs 5 crores in the financial year 2014-15. The corporate tax rate for such companies has been reduced from 30 per cent to 29 per cent (plus surcharge and cess as applicable). Domestic companies engaged in the manufacture of products, set up after March 1, 2016, have the option of being taxed at 25 per cent (plus surcharge and cess as applicable) provided they do not claim certain benefits and exemptions.

Various tax incentives have been given to start-ups. Start-ups engaged in businesses involving innovation development, deployment or commercialization of new products, processes or services driven by technology or intellectual property, have been granted 100 per cent deduction. Tax deduction is available for the first three consecutive years.

Individuals or Hindu undivided families (HUF), setting up start-ups have been exempted from long-term capital gains tax arising out of sale of residential property, should the proceeds be invested in the shares of a start-up.

As an incentive for employment generation, the Budget provides for an additional 30 per cent deduction of tax for remuneration paid to new eligible employees. The provision has been extended to all sectors, subject to fulfilment of prescribed conditions.

For online advertisers, a new equalization levy has been proposed on payments made to non-resident entities. From a prescribed date (to be notified later), a taxpayer engaged in the business or profession of making such payment to a non-resident entity will be required to withhold six per cent of the consideration paid for such services, where the amount of payment exceeds Rs 100,000 in a financial year.

Some measures have been announced on the administration of taxes. Instructions will be issued to field officers to grant a stay on the demand for tax, should the taxpayer pay 15 per cent of the disputed demand, pending an appeal before the Commissioner of Income Tax (Appeals) - ‘CIT (A)’. Penalty will be limited to 50 per cent of tax evaded.

In a case of misreporting of income, however, the penalty will be 200 per cent of the tax evaded. From June 1, 2016, the tax department will not be allowed to appeal against the order of the Dispute Resolution Panel. The time limit for passing an order giving effect to the order of CIT (A) / Tribunal has been fixed at three months (extendable by another three months with the prior approval of Commissioner) from the receipt of the order. In case the tax department fails to pass the order within the stipulated time-limit, it would be required to pay interest at the rate of nine   per cent per annum instead of six per cent per annum.

All services provided by the Union government and its departments to business entities are subject to service tax under a reverse charge mechanism, effective April 1, 2016.

Direct to Home (DTH) license fees, MIB downlinking fees and other registration fees could come under the purview of service tax under the reverse charge mechanism.

The threshold exemption limit of consideration charged for services provided by performing artists in folk or classical art forms of music, dance or theatre has been raised from Rs 1 lakh to Rs 1.5 lakh per performance, with effect from April 1, 2016.

IT software (provided retail sale price has been mentioned) recorded on media has been exempted from service tax from March 1, 2016, subject to payment of excise duty/ customs duty on the product.

Excise duty will apply on media value of customized software (where no retail sale price is required and software is supplied on media) and service tax will apply on residual value, effective March 1, 2016.

Credit availed on payments made to the government or any other person, for assignment of right to use any natural resources, will be spread over the number of years for which such rights have been assigned. The provision, which comes into effect on April 1, 2016, may have an impact on the license fees payable by radio stations, broadcasters, DTH operators etc. and needs to be analyzed further.

Some Budgetary provisions will prove beneficial for the industry. The period for recovery of service tax for cases involving non-evasion of service tax, has been enhanced from eighteen months to thirty months. An indirect tax dispute resolution scheme will be introduced with effect from June 1, 2016 for customs, excise and service tax laws.

The facility for revision of returns similar to service tax has been extended to central excise assesses.

On the customs front, the facility of single-window clearance for customs will be implemented at major ports and airports in line with the ‘Less Government, More Governance’ initiative.

The indirect tax dispute resolution scheme, to be introduced from June 1, 2016 for customs, excise and service tax laws, will be applicable for disputes pending before Commissioner (Appeals) for cases of tax or duty of up to Rs 50 lakhs. Altogether eleven new benches of CESTAT will be established to reduce pendency of tax disputes.