‘Himalaya Neem Facewash MTV Girls On Top’ will be on air at 6.30 PM, Monday to Friday beginning March 7 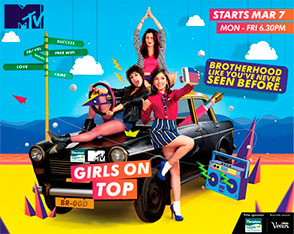 ‘Himalaya Neem Facewash MTV Girls On Top’ will be on air at 6.30 PM, Monday to Friday beginning March 7

This Women’s Day, which falls on March 8, MTV celebrates girl power with the launch of ‘Himalaya Neem Facewash MTV Girls On Top’. The show will tell of the struggles, inspiration and determination of young and free - spirited working women in urban India. The show will premiere on March 7 and will be on air at 6.30 PM, Monday to Friday.

The show strives to redefine what it means to be an ‘Adarsh Ladki’, by showcasing young Indian girls in various avatars - from a havoc wrecking goddess to a hardworking superwoman, a devilish diva to manic pixie dream girl, a bookish romantic to a tattooed hell-raising disc jockey. ‘Himalaya Neem Facewash MTV Girls on Top’ is about three not-so-ideal-girls trying to deal with job issues, love issues and domestic issues.

Viewers will get to see three young women, TV producer Isha (played by Saloni Chopra), tabloid journalist Gia (played by Barkha Singh) and DJ Revati (played by Ayesha Adlakha), as they make their way through life in a ruthless city and grow stronger together as they face one difficult situation after another. The show has been produced by BBC Worldwide.

Commenting on the launch of the new show, Shalini Sethi, Vice President, Viacom18 and Creative & Content Head MTV, said, “With MTV Girls On Top, we at MTV, are all set to take a close look at the lives of three young women trying to make it on their own in a new city. As always, MTV has created the concept of the show keeping in mind the needs and wants of the youth of today. The show will not only showcase the struggles around work, love and life of three independent women, but at the same time, will also offer viewers an insight into the changing face of Indian women. MTV’s new show will resonate with all those young women who have ever dreamed of a life outside the confines of societal norms by breaking stereotypes and questioning taboos.”

Myleeta Aga, SVP and GM- India and Content Head for Asia - BBC Worldwide, said, "Girls on Top is a bold new show that aims at giving viewers an insight into the ambitions and dreams of three headstrong girls living in a cosmopolitan city. The show takes viewers on a journey through their personal and professional lives as they tackle real issues faced by young Indian women today.  The casting has been done very meticulously and the setting is very relatable. Following ‘Kaisi Yeh Yaarian’ which was a huge success, we are really pleased to be collaborating with MTV again on ‘Girls On Top’ - we are certain that it will resonate with the young and ambitious youth of India.”

Speaking for the title sponsor, Hemang Vasani, Brand Manager, Face Care – The Himalaya Drug Company, said, “Himalaya has been offering Indian girls a reason to look and feel confident for decades now. We are proud to be associated with ‘MTV Girls On Top’ and this heralds the coming together of two iconic brands in India. Himalaya has always assured Indian girls of their self- confidence and ‘MTV Girls On Top’ will enable us to reinstate our belief.”

‘MTV Girls On Top’ is the story of every young woman who has ever moved to a big city to make her dream of being independent come true. It’s the story of a world where young women want it all – career, love and a good life – and can have it all too.