Cadbury’s action heroes are back

Conceptualised by Ogilvy & Mather, the TVC begins with scenes from the movie ‘Batman vs Superman’, slowly moving towards the logos of Batman and Superman falling in a pool of chocolate 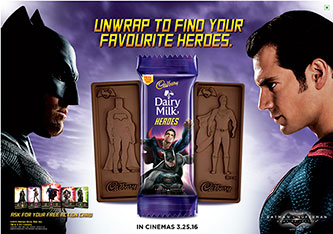 Cadbury’s action heroes are back

Conceptualised by Ogilvy & Mather, the TVC begins with scenes from the movie ‘Batman vs Superman’, slowly moving towards the logos of Batman and Superman falling in a pool of chocolate

Cadbury India is back with yet another quirky creative. After tying up with Warner Bros for the promotion of the movie ‘Batman vs Superman’, Cadbury India is all set to bring excitement among consumers with the new limited edition embossed chocolates called ‘Cadbury Dairy Milk Heroes’. These chocolates will not only have the superheroes embossed on each bar but will also give the consumer a DIY action card of the movie characters. These collectibles can be converted into popup standees.

The last limited edition was for Valentine’s Day for Dairy Milk Silk. Cadbury’s history for embossed chocolates dates back to 2006, when it first launched a ‘Wowie,’ a separate brand in association with Disney. ‘Wowie’ chocolates had Disney characters embossed on them. A few years down the line, they discontinued this collection.

Their current campaign, conceptualised by Ogilvy & Mather, communicates the perfect essence of the campaign. The TVC begins with scenes from the movie, slowly moving towards the logos of Batman and Superman falling in a pool of chocolate. They then rise – on an embossed Cadbury chocolate. A voiceover says: “Your favourite superheroes, in your favourite chocolate, Cadbury Dairy Milk Heroes, with free action cards, Unwarp soon.”

Commenting on the campaign, Neville Shah, Group Creative Director, Ogilvy & Mather, said, “We wanted to make the most of the opportunity to bring together everyone’s favourite Cadbury Dairy Milk with everyone’s favourite superheroes – Batman and Superman. This brief gave us a chance to be playful and spontaneous and it is brought alive exceptionally well with the entire package that has come together – the action cards, the packaging and the chocolate with the embossed superheroes that is a surprise revealed only once you open the pack.”

Speaking about the marketing effort for the campaign, Prashant Peres, Director, Marketing (Chocolates), Mondelez India, says that the brand has planned a host of activities lined up till the release of the movie and even beyond. A 360 degree marketing campaign will commence with buzz on the brand’s Facebook and Twitter pages.

A special TVC was first released on the digital platform which officially went on air during the high octane ICC World T20 India vs Pakistan match over the last weekend.

Additionally, as part of the association, for the very first time Cadbury will also launch a special edition heroes pack for Cadbury 5Star in two unique packs which will boast Batman and Superman in their famous avatars.  The packaging for Batman would be a classic black and a reddish golden pack would be dedicated to Superman.

Peres is confident of engaging consumers with this campaign. He is of the opinion that the real success of the campaign will be the level at which consumers engage with the brand and not sales figures. He commented, “As far as the product Cadbury Dairy Milk Heroes is concerned, I’m confident of it doing well in the market, given the unique product innovation and the conversation we’re already seeing among consumers on social media.”

Lastly, when asked about why only Superheroes with Warner Bros and not any other popular character like Panda, Madagascar or Iceage, Peres said, “Batman vs Superman: Dawn of Justice is this year’s most anticipated superheroes movie. The superhero characters Batman and Superman resonate very well with Cadbury Dairy Milk and Cadbury 5Star’s core target audience – youth. The whole thought behind this association was to marry our consumers’ favourite chocolate, Cadbury Dairy Milk and Cadbury 5Star, and their favourite superheroes, Superman and Batman.” He added, “In the past we’ve had similar associations with Cadbury Bournville – Dark Knights and Cadbury Gems – Justice League, Panda and currently special Angry Birds collection.”

Cadbury Dairy Milk is also tying up with BookMyShow, Cricbuzz, etc., to create excitement about the association among the target audience.