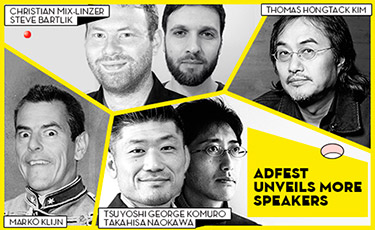 Adfest 2016 has unveiled its much of its program for this year’s festival, which runs over four days from March 16 to 19 in Pattaya, Thailand.

Christian Mix-Linzer and Steve Bartlik of Tracks & Fields in Berlin will present a session on how great technology today can work in favour of creatives,

“We will look at the role of technology in the creative process of selecting music for campaigns. There is no doubt that creative craft – a great ear, musical knowledge, out of the box thinking, experience in matching music to picture and a strong vision – is paramount. While for a long time this craft has seen little technological improvement besides the use of Spotify and Soundcloud, we now see creative music agencies building workflow apps and music supervision companies tapping into API's to have their creativity be influenced by data and automation.

“But at which stage will technology lift your project to the next level, and when it will only create mediocrity? The aim of our presentation is to show when creative work can be leveraged by technology,” says Mix-Linzer, CEO & Music Supervisor at Tracks & Fields.

Mix-Linzer started his first record label at the age of 16 and has worked in the entertainment industry ever since. Bartlik is Managing Director and Music Supervisor at Tracks & Fields. He started making music at the age of thirteen. Four years later, he started organizing the first open air electronic music festivals in Germany.

Thomas Hongtack Kim, Chief Creative Officer at Playground, will present a session about how creative professionals can use their talents to change the world for the better.

“My presentation at ADFEST will explore how Creating Shared Value has become a major trend during the last four or five years. I will also look at some successful cases that increased public awareness on the social agenda and thereafter changed the approaches towards social good,” says Kim.

Kim is also a very prominent and well-known ad critic in Korea who has published six books on advertising and culture.

Make it not the same with Animation – Cirkus, Auckland (Thursday March 17, 6 PM)

Marko Klijn, Executive Producer at Cirkus Auckland, is returning to Thailand to present, ‘Make it not the same with animation’, a session that will showcase why animation is such a great all-round solution for communication.

“I’d like to challenge the notion there’s not enough cool and craft in character animation to award and highlight it requires expert direction, subtle animation skills and purposeful sense of timing. After some lighthearted words of caution, I will showcase how quality animation can create a campaign with a difference,” says Klijn.

Klijn launched Cirkus back in 2006 and has been active in the animation industry for 17 years. He is especially passionate about storytelling, design and character animation.

Tsuyoshi George Komuro and Takahisa Naokawa – Creative Directors at Dentsu Inc. in Osaka – will jointly present a session at ADFEST 2016 that asks: can creativity contribute towards a better society?

Komuro and Naokawa will discuss how agencies can solve social problems and change the world for the better based on their experiences in Osaka, where ad agencies are now working together with clients and local governments to tackle social issues such as a declining and aging population

Since Takahisa joined Dentsu in 1995, he has dedicated most of his career as a copywriter, winning numerous awards. In his private life he is a member of an amateur theater group, as both actor and scriptwriter.

Komuro’s responsibility is to look at business in a holistic way and to solve problems from many different directions. He has also worked for a wide range of clients including Panasonic, Sharp, Coca-Cola, Subaru, and Rohto Pharmaceuticals.