We cover stories which have a global resonance: CNN’s Andrew Stevens

“Journalism is a vivid career. For me it has been a fascinating journey with incredible highs,” CNN’s Editor, Asia Pacific tells BestMediaInfo 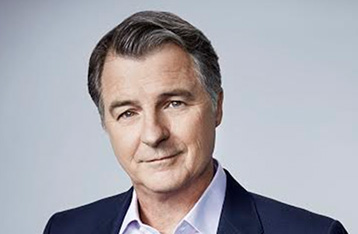 We cover stories which have a global resonance: CNN’s Andrew Stevens

“Journalism is a vivid career. For me it has been a fascinating journey with incredible highs,” CNN’s Editor, Asia Pacific tells BestMediaInfo

As India gears up with newer initiatives from the government, companies from all over the world are excited for the ‘Make in India’ Week (February 13-18) being held in Mumbai. Delegates from all over the world travelled to the city for this event. So did Andrew Stevens, CNN’s Editor, Asia Pacific, fly down for the CNN Asia Business Forum 2016 being held to coincide with this major event.

BestMediaInfo.com caught up with Stevens to know about his career, his highs and lows, about how journalism and media have changed over the years and a lot more. With an experience of almost three decades, Stevens has covered major international stories like the mysterious disappearance of Flight MH370, Philippines typhoon ‘Haiyan’ and many more. Having won various awards for his work, Stevens shares his journey with us. Excerpts:

You've been in journalism for almost three decades. How would you define your journey?

It’s been a fascinating journey, lot of incredible highs! Journalism generally is sort of a vivid career. You deal with a lot of situations outside your area of expertise. Many times you travel to places and meet people. It’s an amazing ride.

I began life at a small daily regional newspaper in Tasmania, a small town in Australia. Doing all of the little things, the shipping notes and the local council notes, sporting and so on.

My first real break was at the local council. I had to go there once a week and find out what was happening and what the council was deciding. Then you ring up the council, and just follow their developments. You had to do the sun and the moon and the time every day. When the sun rises and sets, when the moon rises and sets, when the tide is high, what’s happening with shipping… I’d do a lot of sports coverage. I was there for about two years, and then I became the turf or horse riding corresponding for a year; which was fascinating. I learnt a lot about horse riding. It’s one of those old fashioned learning process where you are thrown into lots of different areas. You learn all the tricks of the trade. In a small community you learn to report and get it right, because if you get it wrong, you’re going to have the local councillor shouting at you. It was a pretty good grounding for me. The trick is to get out, fairly quickly, learn what you can and then move on.

How has journalism changed from when you started to what it is today?

Talking about when I started journalism, the internet hadn’t been invented. In fact, I started with typewriters and no mobile phones. I remember getting my first mobile phone when I was in London. When I started, it was cutting edge with time. Computers were just introduced into the newsroom in Australia and we were one of the first newspapers to get computers. I was there at the dawn of the digital age of media, where typewriters were replaced with computers.

Which was the best story you covered?

I would say the most dramatic story I covered was the typhoon in Philippines, two years ago. It was typhoon ‘Haiyan’. It was the most powerful storm to ever make land fall. The CNN crew had been sent to the area before the typhoon hit. We arrived there and then the storm hit the following morning. It was an incredibly active night shift, hideous and dealing with people losing their lives.

There was a tsunami, and the waves killed many people. Bang in the middle of experiencing this was quite dramatic and terrifying in many ways because you don’t know how bad it gets. It was an eight-meter high wave when it hit the coast, and we were inland, seeing how the water was flooding the floors of the hotel, up and up! You didn’t know what would happen with the wind speed of 325km/hr. It was terrifying as I was right there. It made me realise how strong the force of Mother Nature is. Journalism tends to be focused on stories which are dramatic and dramatic stories tend to be bad news or disasters.

You have won various awards for your work. On a philosophical note, do you think awards for journalists are likely to erode the holy principles of unbiased reporting that we are supposed to follow?

No, I think it’s the opposite. I’ve been judging awards, and I think when you award people for their journalism, it is because journalism is basically getting the story accurately, getting the story from both sides, describing what’s happening truthfully and fairly. Awards should recognize bravery for putting yourself in danger to get a story, shining in light where people don’t want you to shine in light, speaking the truth, and this is what awards is all about and this is what we should aspire to. I don’t think it weakens the industry, I think it strengthens it.

Which was your best interview ever and why?

I always find this one difficult to respond to. One of my most amazing experiences in interviews was with an adventurer. He was an explorer, real life explorer who had sort of walked across the North Pole, and he was just talking about what drives him to become an explorer. He lost the tips of four fingers during one of his journeys and he was one of those people who just followed his dream. He was so passionate about it – and it was dangerous the way he dealt with extremes. It was just very interesting to listen to someone who willingly put his life at risk to be able to achieve a certain goal.

Describe your experience when you were covering the disappearance of Flight MH370?

I covered it in Beijing because a lot of the passengers were from China, and then from Kuala Lumpur. All through, there were many questions and few answers. It was insane and we spent a lot of time on that story. It was obviously very frustrating to be there all the time, not getting any closer to what really happened. It was an incredible mystery.

Which form of media do you think is the next game changer?

We’ve seen so many game changers. Twitter has been a game changer for us journalists. It’s a very useful tool. People get information and facts out very quickly. Even celebrities speak directly to their fans via Twitter. Hence, that’s been a big game changer. Obviously, digital is being a big game changer. Telling a story through video is still the most powerful way of getting across an emotion and reporting it. Of course, the platforms will change, the story telling will change, and people will view it on different platforms.

Do you see a difference between the media in India compared to media in the Western world?

I think there is a very distinctive media in India from the talk shows I watch – the strength of opinion is people shouting at each other quite regularly and not just two people – like six people or eight people! That always baffles me as quite often I can’t really figure what they’re talking as they’re shouting at each other.

Let’s face it, India is a country of 1.1 billion people and 3 billion opinions and everyone has an opinion and they like to share it. Now that is great because, as a journalist, people will talk to you and will want to talk to you, compared to someone in China, where someone will not necessarily want to talk to you. Hence, I would say that Indian media is vibrant with so many newspapers, and I like that. Media in India is healthy and vibrant and it looks like it’s going to stay that way for quite a long time.

I think India has so much news to make it vibrant, while the western world is focusing more on digital. There is so much ease of access for people to read news for free.

On the India theme, is the primetime, anchor-driven debates the right way going ahead?

You want to listen to stories. Debates will be a popular tool for a while and then people get sick of it.

Given the dominance of CNN in global news coverage, would you say it is mainly because of its financial muscle and, therefore, more news gathering resources?

I don’t know whether CNN is in a dominant position. I don’t think it’s about spending a lot of money. Any news organisation works and is successful based on the trustworthiness. Everyone has gone through ups and downs. We’ve also got a few things wrong, but generally there has been commitment on getting things right. We’ve got to a stage where people turn on to watch CNN and have the trust of stories being told not to anyone’s agenda. You can’t say that about all television channels. We were the pioneers. We had the first mover advantage, but to keep that you have to move with time, change with the times and give what people want. The actual ‘storytelling’ remains the same, but its delivery and style will change.

We have seen quite often that news channels like CNN and BBC tend to give over-arching coverage to Africa vis-à-vis Asia and India. Is there any reason for that?

Stories tend to be universal and that’s what we look for, than for incidences specific to countries. Professional journalists should be able to go anywhere and given enough time, understand the culture and the country; and how best to choose an approach to tell a story. We cover stories which have a global resonance.

Who are the international journalists that you admire the most?

I admire a lot of our own people like Arwa Damon, a reporter who has lived in the Middle East and is incredibly brave. I like people like Thomas Friedman, he’s an American journalist and a commentator now.

Finally, your opinion about the future of Print media…

I don’t think I’m qualified to say. I’ve come to India many times. To give you a seasoned opinion on what is going to happen to a section of the media, I don’t know. I haven’t looked through the numbers in the last few years, but Print media has been pretty strong. It takes years to change people’s habits. What’s happening in India is that you have 400 million people online now, which is a massive number of people. In a country of 1.1 billion people, most of them are online, but where are the remaining people getting their news? Hence there are newspapers. These people aren’t going to be connected overnight. If I have to compare to markets like the US, India still has a huge market for newspapers.