With six years of experience in advertising. He likes advertising because he can apply creativity in a problem-solution format 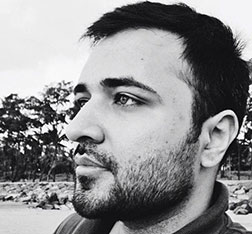 With six years of experience in advertising. He likes advertising because he can apply creativity in a problem-solution format

As it is rightly said, the key to success is hard work and determination. This totally fits in with Yogesh Rijhwani who has six years of experience as a copywriter. Three years back, he joined Scarecrow Communications with an aim to learn and grasp the intricacies of advertising. So far, he has worked on brands like Parle, Quikr, Zee Khana Khazana, Nitco, Religare, Bedbathmore, Rupa and Anchor. His work at Scarecrow has already won more than 10 awards in 2014 including Writer of the Year.

Highlighting his earlier life, Rijhwani said, “I've had a rather safe, cocooned upbringing in Mumbai. After completing Engineering, I switched to advertising. I wasn't very happy with what I studied, but once I was in advertising I felt at home. I think even while studying I had an inkling that I would switch to advertising.”

He feels joining Scarecrow was a high point for him as the agency gave him the platform to express himself freely. Sharing more high points, he said, “The next one was in 2014. It was the first year I had sent entries to an awards show and I ended up winning Writer of the Year at Radio Mirchi Kaan Awards 2014! The Campaign of the Year, “Pairon Tale”, ended up sweeping all radio awards at Goafest and Kyoorius.”

According to Rijhwani, launching Colors Infinity was the most challenging assignment and it achieved great success including winning best launch at the Promax 2015 Awards.

So, what prompted him to join the ad world? Pat came his reply, “I had a creative bent of mind and always longed to do something that creative in nature. Advertising drew me because it is a place where I could apply creativity in a problem-solution format.”

Interestingly, he said if he would not have been in the ad world, he would probably be a life coach. On asking why, he said, "I think it's a profession which uses similar a skill set like advertising – communication, understanding people, solving problems."

Rijhwani finds advertising one of the most ever changing and evolving professions. It is also one of the fastest growing. He said, "Globally advertising is no longer a meaningless interruption. The medium has become immaterial; the message and how beautifully it's told is all that matters. I think technology has widened the playing field for creativity."

Has his expertise helped Scarecrow grow? He says that Scarecrow is a place that encourages fearless thinking, taking leadership and responsibility. "I think I have wholeheartedly participated in the process."

With increasing demand for creativity, Rijhwani feels that the rising appetite of brands for more creative work is a great sign. "We creative people can only enjoy these exciting times," he says.

A strong believer in the fact that having the constant courage to take new leaps of faith, Rijhwani likes playing poker as it is a sport that involves observing people.

That’s a great start to a bright future.