Abaran Jewellers does a wall wrap at Bengaluru Airport

JCDecaux, the advertising concessionaire of KIA, has executed the 12-month-long outdoor campaign 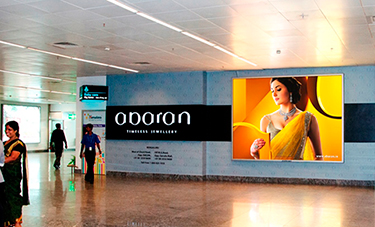 Abaran Jewellers does a wall wrap at Bengaluru Airport

JCDecaux, the advertising concessionaire of KIA, has executed the 12-month-long outdoor campaign

Leading Bengaluru based jewellery brand, Abaran, is running a 12-month-lomg outdoor campaign in the domestic arrivals baggage claim area at the Kempegowda International Airport (KIA) in Bengaluru. Showcasing one of its exquisite collections in the creative, the brand aims to establish a unique brand identity among its target audience.

Pratap Kamath, Managing Director, Abaran, said, “The idea was to create a stir among the airport audience which is a mix of business as well young travellers matching exactly with our brand TG.”

Adding a distinctive dimension to the display, JCDecaux, the advertising concessionaire of KIA, has also the utilised letter ‘a’ from Abaran’s logo to create a strong visual indicator in the form of a 10x27 ft wall wrap. The brand creative is being displayed on a lightbox installed on the wall.

The campaign is believed to have generated positive response in just a few weeks from its commencement as the showrooms have begun to receive a fairly younger audience.

“Big impressions such as our brands wall wrap definitely help in making great impressions on client as well as generating traffic and sales in the process,” added Kamath.

With a 25.2 per cent growth in overall traffic, the Kempegowda International Airport welcomed 18 million passengers in 2015. The airport continues to be South India’s busiest and the third largest airport in India.

“Long-term campaigns such as Abaran tend to yield sustained brand awareness and it’s indeed gratifying for us to see them pleased with the initial results,” said Raheel Amjad, Business Head - KIA for JCDecaux India.