He has seen it and done it all. Madison World’s Chairman and Managing Director throws light on his remarkable journey with Madison, his professional philosophy, targets, and the future of advertising 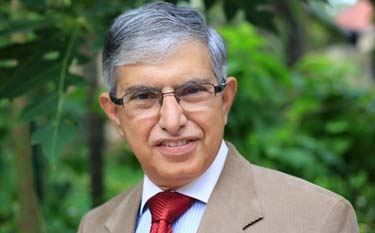 He has seen it and done it all. Madison World’s Chairman and Managing Director throws light on his remarkable journey with Madison, his professional philosophy, targets, and the future of advertising

What can be a better day to interview one of the pioneers in Indian advertising! Yes, it was Sam Balsara's birthday! Chairman and Managing Director of Madison World, Sam, as he is popularly known, started in an era when advertising was limited to a few chambers. After 27 years, with his hard work and passion, he has taken Madison to a remarkable position and achieved many milestones along the way.

Sam has seen it and done it all. He has worked with companies like Sarabhai, Cadbury, Contract Advertising and Mudra Communications before starting Madison in 1988. He has served as President of Advertising Agencies Association of India (AAAI) from 2002 to 2004; Chairman of Advertising Standards Council of India (ASCI) from 2000 to 2001; and been President of The Advertising Club for three terms from 1989 to 1992. The Economic Times Brand Equity Ad Agency Reckoner ranks Sam as “India’s Most Influential Media Person” for the last 10 consecutive years. He is also the recipient of the AAAI’s Lifetime Achievement Award.

Madison is one of the oldest diversified communication groups in India today with 26 units across 11 specialized functions of Advertising, Media, Business Analytics, Outdoor, Activation, Events, PR, Retail, Entertainment, Mobile and Sports. It employs over 1,000 professionals in India, Sri Lanka and Thailand. The gross billing of Madison World is around Rs 37 billion.

Today, media giants like Mindshare, Maxus, ZenithOptimedia, etc., see Sam Balsara and his Madison Group as a formidable adversary. He is a Goliath that has faced and often bested GroupM at pitches. The agency has been growing year on year. 2015 was a great year for Madison Media in terms of new business wins, awards and people. They won as many as 21 new businesses in one year!

BestMediaInfo.com caught up with Sam last week to throw light on his remarkable journey with Madison, his professional philosophy, targets, account wins and more. Edited excerpts:

Madison was on a roll last year. What was the strategy that got this string of 21 new businesses? How would you like to define 2015 for Madison?

Madison Media has probably had its most eventful year last year in recent times on all fronts – people, business and awards. Obviously the year had its highs and lows, both.

On the people front I am personally delighted that we convinced Vikram Sakhuja to return to India and take the reins of both Madison Media and our OOH companies, whilst we were sorry to see Gautam Kiyawat return to his base in Singapore. Not only were there new people on board but we also announced two richly deserved promotions – Vanita Keswani and Shekhar Banerjee.

So what is the target this year?

Well, at Madison – which is in its 27th year – we do not work with targets. Yes, we work with something called budget. I think our targets are qualitative in order to improve our quality of services, products and thinking. I think in an agency a target, to my mind, is a little unfair responsibility on the part of management to put on an employee. Hence, as far as possible we do not work with targets. It is important to have budgets in order to plan expenditure. Etc., and this is what differentiates us from other agencies.

Madison won a large number of awards last year. Which one was the most unexpected and which one do you really rate as a big achievement?

Yes, we did win a lot of awards! I do not think any of the awards that we won were unexpected. Some years we were told that Madison was very good but it did not perform well at awards; hence we did a lot of introspection and we found that people who are very busy working on our clients are not able to spend adequate time and give attention to the creation of entries. We learnt the hard way that it is just not enough to have good work but it is also important to work on packaging an entry for an award which is an art and task by itself. I guess, over the years we have impressed on our people on what the importance of good packaging, importance of creating a good video, spending some time on conceptualising a video is for an entry, and this has helped us.

You said sometime back that you have understood the awards code. What exactly did you mean?

Madison welcomed a few veterans like Vikram Sakhuja and Anita Bose. How do you think their expertise will help the agency grow?

It was a pride and high point for Madison, and me personally, when Vikram Sakhuja joined us on October 19, 2015. I have no doubt in my mind that Vikram will help Madison change and take it to the next league. He will surely bring fresh new energy, thinking, greater focus on digital and also focus on tools, research and data.

Every now and then, the market is abuzz with talk of Madison World selling its stake, especially in Madison Media and Outdoor. Where exactly do you stand on this? There cannot be smoke without a fire!

We are of some interest to the multinational agencies who want to acquire a stake in Madison. We are not averse to selling our stake but only when we are fully convinced. The primary concern is to make sure that Madison keeps growing and improving our quality of products and services to our clients. If we feel that any of the moves can help us achieve our objectives, then we will possibly entertain that.

How would you like to define Madison then and now?

Madison when started was a single unit and I was the jack of all, but now we have separate companies running different verticals. We now have more than 300 clients across Madison World. It is been a great journey to let Madison reach this position.

What do you have to say about the current scenario of media buying and selling?

Clients today are making a mistake by focussing on efficiency and not keeping a strong eye on effectiveness. I think as the markets grow more and more competitive and as advertising noise levels increase in the marketplace, advertisers should be focusing on effectiveness rather than efficiency. Advertisers who are focussing on media efficiency are not doing the correct thing. Rather, they should spend more money towards creating an effective impact.

The Indian ad world is the most diverse and among fastest growing markets in the world today. It has grown right under my nose from just a Rs 2,000-crore market to a Rs 40,000-50,000 crore market today. Growth with itself brings its own complexities and challenges and I think we live through these times.

We see a lot of young ad guys quitting big agencies and starting their agencies. Do you consider this as a healthy trend or is it a case of ambition substituting experience?

It is good! But the word of caution is that they should make sure they have adequate intellectual capital in terms of experience and expertise. It is always better to start a year later than a year earlier.

Looking at the way the industry is growing and shaping up, do you think conventional media will sustain because we see a lot of new marketers are increasingly tilting towards digital?

There lies no doubt about the fact that digital will grow phenomenally in the country. It has been there since long but now is the time that we have reached inflection point. According to our Pitch Madison Study, for the five years, digital has been growing 35-50 per cent every year and has now become a Rs 4,000-crore market which is quite sizeable. From here on it will keep on growing rapidly till it reaches about 20 per cent of the media market.

In my opinion, while digital will grow, I think all other media in India will also keep on growing because India is an under-advertised market as we do not have enough brands. The competition is high among the available brands. For example, Print Media is seeing a downfall everywhere but is still growing in India. I feel no other medium is going to get threatened by digital; we just have to adopt the medium and technology.

What would be the one piece of advice for Lara (Balsara) and other young professionals in your team?

My advice would be a little old fashioned but I would say when you are young think more about the company or the agency or the brand that you are working in/on and not about your own growth. And for god's sake, do not switch jobs so often! If you look at the successful people who have done something in life, one thing that is common among all of them is that they have spent a good amount of time in one company and doing one thing. Changing jobs too frequently would be satisfying in the short run, but if you look back after ten or fifteen years, you will not have anything to show. So, please be cautious and think carefully about your moves.

You have achieved almost everything. What is left for you to scale?

What makes you think I have achieved everything! I have a whole life ahead in front of me. I am now looking forward to be a grandfather very soon! (A big grin)