India is one of the few large markets with growing traditional media: CVL Srinivas

GroupM predicts of 15.5% growth in AdEx in 2016, and interestingly, 2015 is acclaimed to be one of the best years for ad-spend growth in the last five years 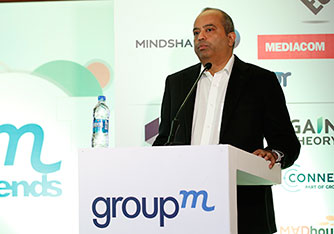 India is one of the few large markets with growing traditional media: CVL Srinivas

GroupM predicts of 15.5% growth in AdEx in 2016, and interestingly, 2015 is acclaimed to be one of the best years for ad-spend growth in the last five years

One of the important biannual advertising expenditure futures report ‘This Year Next Year’ (TYNY) by GroupM which forecasts India’s advertising investment every year and next year was released last afternoon in Mumbai. The report highlighted the fact that advertising spend would approximately witness a growth of 15.5 per cent in 2016 over the corresponding period in 2015. The last calendar year closed on a promising note, with the advertising expenditure in India closing at Rs 49,758 crore, growth of over 14.2 per cent over 2014.

During the report launch some of the interesting facts that came across were that India is the fastest growing market among all the major markets of the world. 2015 is acclaimed to be one of the best years for ad-spend growth in the last five years. While global headwinds are building up in the New Year, there are a number of positive factors that will help the Indian ad-sector grow at higher levels in 2016.

While FMCG, Auto and E-commerce have been the top contributors of ad-growth in 2015 and are expected to continue to invest this year too, sectors like Telecom including handsets, BFSI and the government sector are expected to see a ramp up. Interestingly, events like T20 World Cup and multiple state assembly elections will give further impetus to ad-spends. GroupM also pointed out the fact that digital will remain one of the fastest growing platforms.

Speaking with BestMediaInfo.com, CVL Srinivas, CEO, GroupM South Asia, said, “Well last year, 2015 we estimated a figure of 12.7 per cent growth in the start of the year but we ended up at 14.2 per cent so this was quite unexpected for us.  And this came on the back of the strong growth garnered by E-Commerce and FMCG sectors. These two sectors have taken ad-ex to a higher number which came out as a pleasant surprise for us.”

Sharing some key highlights of the year gone by, Srinivas said, “Firstly Digital emerging as one of the top three media. It is close to 10 per cent of the total ad-ex and interestingly, in 2016 it is expected to grow around 12.7 per cent. Secondly, despite its large base television grew to almost 18 percent last year. Fortunately, India is one of the few large markets where most traditional media platforms have shown positive growth.”

When asked if all the ad-ex predictions complimented each other, he said, "Yes, more or less same but the only surprise was on the television front as it performed higher than what was expected in the 2015."

On the trend of traditional advertiser depending largely upon e-commerce sites for their lead generation and sales, Srinivas noted that this trend will catch up in 2016 as E-Commerce as a platform will establish very soon in terms of advertising. “A lot of bigger players have already announced their plans and are seen investing," he said.

Srinivas also stated that GroupM has had one of the good years by keeping our existing clients happy, having excellent track records in terms of new business wins and we also won a significant number of awards last year. “All the five agencies under GroupM performed extremely well. We also ended up winning 'office of the year' award at our GroupM APAC awards which is one of the special awards for us. We have seen a lot of good work from our clients in the data and analytics space. There was also some interesting work in the mobile and content space," added Srinivas.

Not only that the conglomerate delivered good business results but interestingly all the new practices that they invested in, not just to stay relevant but to navigate a good future, they all worked well.

The TYNY report is the most comprehensive understanding of the estimated media spends by advertisers in the current year. It also highlights some of the industry sectors that will have a major effect on advertising spends across media.