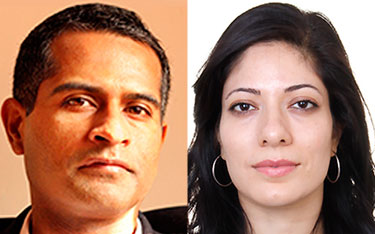 On the back of explosive growth in 2015, Cheil India today announced the appointment of Shekhar Suri and Farah Bashir to bolster their Digital and Strategic Planning capabilities. Suri joins the agency as General Manager-Digital and will be reporting to Sanjeev Jasani, Head- Digital. Bashir has been appointed as General Manager-Planning reporting to Sonal Narain, Chief Strategy Officer.

Speaking on the occasion, Jasani and Narain said, “2016 is going to be bigger and better for us. We are going to be even more aggressive and will be strengthening not just our talent pool but our internal capabilities as well. Shekhar & Farah’s proven track record and expertise will only help in further amplifying and accelerating growth for us. We are excited to have them on board, partnering us in scripting Cheil’s growth story in 2016.”

Suri comes with over 13 years of experience in management and leadership in India, Sri Lanka and Africa. He has worked across categories, such as, consumer durable, banking, telecommunication and advertising. He has been a part of setting up brown field projects and led the business development and marketing strategy globally for some of the key clients like Bharti Airtel, Idea Cellular, Aircel, Reckit Benkiser. Suri is a Post graduate in International Business. In his last stint, he was with DigitasLBi where he was heading the Delhi Branch, he has played an instrumental role in establishing the agency in the region. He has also been associated with companies such as LG Electronics, Bharti Telesoft and Tech Mahindra in the past.

Bashir has over 12 years of experience across geographies- India, Singapore, Vietnam, Thailand, Philippines, Indonesia and Brazil, where she has worked as a journalist, research analyst, marketing professional before moving to the planning side of advertising. In her last stint, Bashir was Vice President Planning at Lintas, She also been associated with DDB Mudra, Unilever Asia, Quantum Market Research and Reuters in the past. She has lent her expertise to myriad accounts, such as, Wills Lifestyle, OLX, Hindustan Times, Volini, Revital, Reckitt Benckiser, NDTV, Hindustan Times, MTS, Microsoft, Singapore Health Promotion Board (HPB), Singtel, Zopper, Twinings, Cisco, GPI and Dabur.