Entitled “Sherlock: The Abominable Bride”, it is set to premiere on Jan 9 at 9 PM, kicking off AXN’s New Year offerings 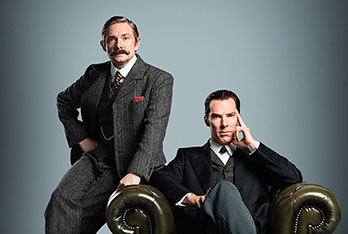 Entitled “Sherlock: The Abominable Bride”, it is set to premiere on Jan 9 at 9 PM, kicking off AXN’s New Year offerings

AXN is set to kick off 2016 with a special treat for fans of Sherlock in India. From the BBC production house, Sherlock, entitled “Sherlock: The Abominable Bride”, is set to premiere on Jan 9, 2016 at 9 PM on AXN.

Set in Victorian London of 1895, this special will witness Sherlock Homes and Dr Watson in a different era. The famous detective duo finds itself on Baker Street amidst steam trains, hansom cabs and top hats. While some things remain same, such as their friendship, the adventure, the murder... and the dialogue – “The name is Sherlock Holmes and the address is 221 Baker Street”.

IMDb has rated the Sherlock series at 9.3. Written and created by Steven Moffat and Mark Gatiss, it is inspired by the works of Sir Arthur Conan Doyle. Before the production of Season 4 kicks off later this year, this special episode will be a treat for Sherlock fans who can catch the premiere exclusively on AXN.

Saurabh Yagnik, Executive Vice-President and Business Head, Sony Pix and AXN India, said, “Sherlock is an icon worldwide, and AXN is the home to Sherlock in India. The fans here have waited two long years to see the new episode of this cult show, and we are very excited to be premiering it. In Sherlock: The Abominable Bride, viewers will witness a very different, Victorian version of the contemporary Sherlock. Tuning in to this two-hour special episode will definitely enthral the viewers as they are taken into a different era of mystery and crime-solving. We expect to delight our viewers with this offering because they know, if it’s Sherlock, it has to be on AXN.”

Myleeta Aga, SVP & GM, BBC Worldwide India, said, “Sherlock has become a global phenomenon that we at BBC Worldwide are extremely proud of. AXN India has been a valued partner for Sherlock for the past three seasons and we are very happy to work with them again for Sherlock: The Abominable Bride. We are confident that this special episode will captivate Sherlock fans in India.”

Catch the special episode Sherlock: The Abominable Bride on the following dates:

Here is a sneak peek: