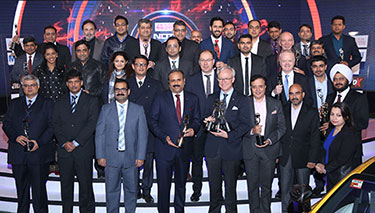 This year, the NDTV Car and Bike Awards saw a panel discussion on the state of the industry, the status of the crucial ‘Road Safety Bill’, and how the industry is looking to play its part to tackle growing air pollution. The eminent panellists included Pawan Munjal, Managing Director & CEO of Hero MotoCorp, and Kenichi Ayukawa, Managing Director of Maruti Suzuki India. The discussion was moderated by NDTV Group CEO, Vikram Chandra.

Sumit Sawhney, CEO of Renault India was awarded the coveted Automotive Man of the Year 2016 for the launch of the Kwid, and his bold strategy behind that success. The 11th   edition of the awards also honoured products launched over the past year, across both car and bike segments and recognised industry leaders, advertisers, marketers and PR professionals from the industry.

The Mobil CNB Viewers’ Choice Awards for both cars and bikes provided NDTV viewers the exciting opportunity to vote for their favourite car and bike nominees and stand a chance to take the year’s hottest wheels home. Renault Kwid and Bajaj Pulsar RS 200 were announced as the Mobil CNB Viewer’s Choice Car and Two Wheeler respectively. Virat Kohli was awarded the Brand Ambassador of the Year while the BMW i8 took home the trophy for Automotive Technology of the Year.

Commenting on the state of the industry, Siddharth Vinayak Patankar, NDTV Group's Editor, Auto & Head of Automobile Programming, said, “What a superb year it has been, that has given us such competent and exciting products. The industry is also climbing back from its worst days, which is encouraging for us all. I remain proud that we deliver India's most credible automobile awards! I have fiercely guarded the awards process and we had fantastic juries for the various categories, which made it even more comprehensive. As always we credibly honour the best of the auto industry while also reflecting the choices and sentiments of customers, manufactures and auto lovers alike.”

To ensure a seamless and transparent selection process, jury members got a hands-on experience of each car and bike at the Buddh International Circuit, along with the nominee’s specifications, its market performance and details on its immediate competition. The jurors then led through a sanitized process filled out their assessment on each nominee and awarded points to all the contending vehicles. The scoring and voting system instituted by the World Car of the Year Awards was used in the selection process.

Ballot voting was conducted in isolation to other jurors and is monitored and organised by auditors Ernst and Young.