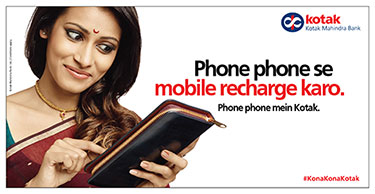 In today's digital world, the mobile phone is fast becoming the focus of everybody's lives. It empowers people to do what they want to do and need to do from wherever they are, whenever they want to. Banking is no exception. Kotak Mahindra Bank was a pioneer in digital banking, be it with hashtag banking or services like mail money and Insta PIN generation.

Over the last few months, Kotak has added several new innovative features, including message money, flight booking, buy a book via twitter, mobile and DTH recharge, internet-free mobile banking, and several other services. Today, there are more than 77 different things a customer could do using the Kotak mobile banking app.

The campaign builds on the hugely popular ‘Kona Kona Kotak’ campaign that announced the coming together of Kotak Mahindra Bank and ING Vysya Bank. The multimedia campaign across TV, outdoor, and digital is built around the slogan "Phone Phone Mein Kotak". It showcases how mobile banking using Kotak's app and Hashtag banking features has transformed the way people lead their lives, in simple and profound ways, be it in large urban cities or in the smaller towns of our country.

The campaign explores this change that is sweeping across India thanks to technology, innovation, and a customer orientation.

The campaign pegs on three unique features of Kotak Mahindra’s Banking experience on Mobile: Instant Money Transfer, Tweet to Buy a Book and Flight Booking to give viewers a perspective on the transactions they can do on their phone. It tries to communicate that with the passage of time, the means of banking may be evolving but the emotions are just the same.

Karthi Marshan, Sr EVP and Head, Group Marketing, Kotak Mahindra Bank, said, “Banking has truly evolved from traditional branch visits to anytime, anywhere banking on several screens, mobile being the most popular and widely accessed. The adoption rate of our mobile banking app is amongst the highest in the country. As pioneers in digital banking, we offer as many as 77 myriad services through our banking app that include mobile and DTH recharge, ecommerce transactions, etc.”

“Phone Phone Mein Kotak campaign highlights some of our key mobile features such as flight booking, money transfer and tweet to order a book. We have seen a significant surge in in-app shopping and payments, and this momentum is likely to continue. Further, with ‘Tweet to Order’ we have integrated conventional banking and social media creating a revolutionary concept called Social Commerce,” Marshan added.

D Ramakrishna, Agency Head, Cartwheel, said, “Phone Phone Mein Kotak is the second sequel to the highly recalled and successful Kona Kona Kotak campaign. This campaign highlights the far reaching impact that mobile banking has had on the day- to-day lives of Indians, be it in Chennai or Chittorgarh.

Kotak was among the first banks to pitch its tent in the digital domain, with features like instapin, mailmoney, and hashtag banking. Today, there are 77 different things Kotak customers can do with their mobile banking app. This campaign seeks to help Kotak claim leadership in mobile banking by leveraging the utility, convenience, and efficiency of its digital features. With apps that work on smart and feature phones, Kotak is uniquely placed in staking such a claim.

The campaign has 3 TV commercials built around flight booking, message money, and tweet-to-buy-a-book. The outdoor campaign highlights several other features. A bunch of youtube videos as well, talk about some of the 77 things customers can do.