Premiering on November 2 at 7 pm, ‘Kaala Teeka’ will air every Monday to Friday and will replace ‘Tum Hi Ho Bandhu Sakha Tumhi’ 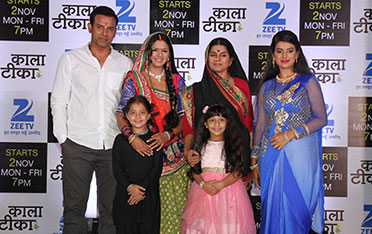 Premiering on November 2 at 7 pm, ‘Kaala Teeka’ will air every Monday to Friday and will replace ‘Tum Hi Ho Bandhu Sakha Tumhi’

The flow of fresh content on Zee TV continues with the Hindi GEC gearing up to launch a new fiction offering, ‘Kaala Teeka’. Premiering on November 2, 2015 at 7 pm, ‘Kaala Teeka’ is a social drama that attempts to break the shackles of age-old superstitions and endeavours to create awareness against it amongst the masses. To be aired Monday to Friday, the show replaces ‘Tum Hi Ho Bandhu Sakha Tumhi’, which was launched in May this year.

Set in Mithila, Bihar, ‘Kaala Teeka’ is the story of two young girls whose lives are entwined by an act of superstition. The show captures the journey of a girl child Kaali, who is treated as a human Kaala Teeka for another child Gauri and is expected to shadow her everywhere for the well-being of the latter. This regressive, superstitious belief of using one child’s presence merely to ward off evil influences from another poses several obstacles in the former’s path of growth and overall development. The show captures a worst form of superstitions – personification. It showcases Kaali’s journey of hope as she overcomes these challenges and enables Gauri to find her true self. She also reaches out to her own aspirations and ambitions in life and becomes an inspiration to others.

Commenting on the new show, Pradeep Hejmadi, Business Head, Zee TV, said, “With ‘Kaala Teeka’, the objective is to sensitise audiences to question age-old beliefs and define their own limits to blindly following superstitions  in their lives to bring about a progressive shift in their mindset. The attempt is to encourage our viewers to think rationally and do away with archaic traditions and blind faith that impedes one’s growth and overall development. Our previous association with Tony and Deeya Singh has produced hits, including ‘Banegi Apni Baat’ and ‘Chhoti Bahu’. We look forward to a great show in ‘Kaala Teeka’.”

Produced by Tony and Deeya Singh under their banner DJ’s Creative Unit, the show features veteran actress Mita Vasisht, who will play the role of the matriarch and be responsible for all the troubles in the lives of the lead protagonists – Gauri and Kaali. The show introduces two new faces on Indian television – Adaa Narang as Gauri and Sargam Khurana as Kaali. Daljeet Kaur Bhanot returns to television along with Bhupinder Singh in pivotal roles. Kaur plays the role of Manjari, a mother figure to Gauri and Kaali, while Singh plays her husband, Vishaweer Jha, a well-known astrologer of Mithila.

Commenting on their show, producers Tony and Deeya Singh said, “‘Kaala Teeka’ says a big no to bigotry and urges people to broaden their horizons and ignore outdated superstitious beliefs. In showcasing the journey of Kaali and Gauri, we’re trying to create awareness about certain age-old, redundant practices and superstitious beliefs that are unfortunately still prevalent in India. The story captures Kaali’s journey of hope as she fights for her place under the sun and reaches out to her own dreams and aspirations, rather than being relegated to leading the life of a human Kaala Teeka.”