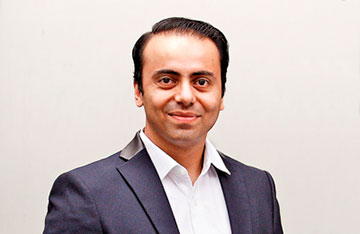 October is set to see some big ticket reality show releases on the leading Hindi GECs. While Colors is launching ‘Bigg Boss Nau’ with Salman Khas as host on October 11, Star Plus is likely to launch ‘Aaj Ki Raat Hai Zindagi’ with Amitabh Bachchan, meanwhile Zee TV is gearing up to premiere ‘I Can Do That’ with Farhan Akhtar as host on October 17 at 9.00 pm.

As reported earlier, ‘I Can Do That’ will feature 12 television celebrities who will undertake various tasks that they’ve never done before. The reality show has been developed by Israel’s Armoza Formats.

In conversation with BestMediaInfo.com, Pradeep Hejmadi, Business Head, Zee TV, speaks at length about the new show ‘I Can Do That’, choice of Farhan Akhtar as the show’s host, performance of recently launched shows on Zee TV and more. Excerpts:

So, India is not just importing arms from Israel, but we’re now buying their content too. First we had Sony acquiring ‘Power Couple’, now Zee TV has acquired the rights for ‘I Can Do That’. Perhaps, this will help to further strengthen Indo-Israeli ties, albeit in a lighter vein...

The defence ties are in their own space. As far as we are concerned, we believe that the world is our family. We don’t see geographical boundaries as something that draws us on either side. So, if there are great ideas, we don’t really draw the line. If at all we feel that programming and content can bind people together, then we would love to do that.

Besides, Armoza has quite a few interesting formats. We found this interesting because it is very close to our core philosophy.

Indian viewers are long privy to task or action-based shows, hence comparisons with the likes of ‘Fear Factor’, ‘India’s Got Talent’ and ‘Entertainment Ke Liye Kuch Bhi Karega’ will be inevitable. How does ‘I Can Do That’ propose to differ from the rest?

For ‘Fear Factor’ or any of the other shows that you’ve mentioned, there’s not really a fine line but a thick line in terms of division. There are certain primal fears that are evaluated in some of these formats. In this case, what we’re doing is that we are getting people who are specialists in a particular serial. So, the rigours that we will follow in the format is that when we are talking to the players we start identifying what they are good at doing and what are the things they have never explored in their life and what are the things that they would have liked to perform. This is something unique to our format. The contestants get out of their comfort zone. They have one week to prepare for the task and the audience gets to see their effort.

Whilst the invite for your show mentioned ‘Ab Yeh Karengey Joh Pehle Kabhi Nahi Kiya’, you have retained the English name for ‘I Can Do That’. Why is that?

We thought that ‘I Can Do That’ is a very nice way that people can look up to the show and understand what the promise is, and when they see the people do the tasks, it will become a buzz word. ‘I Can Do That’ is also something that people can easily start saying as a statement for ‘I accept that’. Besides, through entertainment people will be able to learn these four words and change the way they look at challenges in life.

With this show, Zee TV, too, is doing something that it has never done before – which is acquiring a foreign format. Zee has often taken pride in its home grown formats. What has prompted this change in strategy?

We continue to develop on our indigenous formats, but we found this format very interesting. It is very close to our core which is why we picked it up. It’s not that earlier we were averse to acquiring international formats, but we’ve been able to develop our own way of identifying local talents. We’ve always open to acquiring content that fits into our philosophy.

Your marquee properties ‘Sa Re Ga Ma Pa’ and ‘Dance India Dance’ may not be as strong as they were before. Is that also what prompted you to shop outside India?

No, not really. If you look at singing reality, we did ‘Sa Re Ga Ma L’il Champs’ and its rating is better any international show featuring. When we do ‘Sa Re Ga Ma Pa’, I’m sure we’ll beat all singing reality shows hands down. We have the ability to know how to deal with traditional formats. I’m not saying pompously, I think it also gives you flexibility to manoeuvre. A lot of formats come with restrictions, but we’re able to do a lot more research, understand where we need to customise, and what we need to do better when it comes to singing reality or dance reality shows.

‘Sa Re Ga Ma Pa’ will definitely return and it could possibly follow ‘I Can Do That’.

What expectations do you have from ‘I Can Do That’?

We never reveal expectation in terms of ratings, but we obviously expect it to be a leader in the slot and give competitors a real run for their money.

While he is a good actor-director, Farhan Akhtar has been as impressive as a host for ‘Oye! It’s Friday’. What prompted Zee to opt for Farhan Akhar as the host for ‘I Can Do That’?

For us there were a couple of things that appealed to us about Farhan. Firstly, he is a multi-talented guy. He embodies the value of ‘I Can Do That’. That is very important to us when somebody stands up and anchors the show. Secondly, everybody has a journey, and he’s had a beautiful journey. From our assessment, he will be able to deliver a good show. You will see a different side to Farhan Akhtar, the host, through this show. He’s really gelling well with the contestants.

A lot of your contestants have participated in task/action based shows earlier, while some are heavily associated with a particular brand. Wouldn’t it have been ideal for you to opt for new faces?

The strategy is to bring in people who would follow these celebrities from those places (past shows). So, people would say while we’ve seen Bharti do comedy, but can she do that? That’s the whole idea of the show. You’ve seen these celebrities excel in a particular domain, but now we are putting them in a completely different zone.

Usually for a task-based show involving celebrities, a network doesn’t reveal the names of the contestants until the launch episode. The suspense helps to build hype around the show. But you have revealed all your cards much before the show’s launch.

It really depends upon the nature of the format. More importantly, it depends upon the strategy that a network wishes to adopt. In some cases ‘A’ works, while in others cases ‘B’ works. You’ve got to pick what works the best for you. When you say ‘I Can Do That’, the springboard is ‘who is saying I can do that’. People tend to be very ‘copy and paste’ in their strategy, but those are voyeuristic shows. So, for voyeurism, it is important to hide. That helps for people to peep into it much early. These are all mind games though.

How many sponsors have you got for this show?

Vaseline is the title sponsor. We are communicating with a host of other advertisers, but we’ll speak about them once the deals are signed.

(It may be noted here that ‘I Can Do That’ is co-powered by OLX.in and Asmebazaar.com)

Please share some details on the marketing strategy for the show?

The show has a wide appeal – from kids to elderly men and women. We are using the network very exhaustively to reach out to a large diaspora. Outside the Zee network, we are looking at news and sports belt. In addition to that, we are also doing a fairly heavy digital campaign. Each of the 12 celebrates have their own fan flowing on the digital front. Farhan himself has a huge fan base. So, we’ll look to stir that up. Our (Zee TV) own base is very large with millions of followers. We’ll also go off air with billboards, radio, etc.

Zee TV has launched a host of new shows in the last 4-5 months. How have these shows been performing?

The new shows are picking up momentum. Each of the stories has its own inflection where it will take off. We’re happy with ‘Ek Tha Raja Ek Thi Rani’; ‘Sarojini’, too, has been picking up. For ‘Ek Tha Raja Ek Thi Rani’, we’re averaging about 2 (TVR), while with ‘Sarojini’ we’ve touched a rating of 1 (TVR). ‘Tashan-e-Ishq’ opened at 2.5 (TVR) and now since the plot is in the romance zone, the ratings have gone down. We’re hoping the ratings will go up once the high points arrive.

Are you satisfied with these numbers? Besides ‘Kumkum Bhagya’, Zee TV seldom has any other fiction shows in the top 5. What do you think you need to do to improve your fiction? After all, that is the lifeblood of any GEC.

They will pull in more numbers. Every show has its own graph. So, this is a projected space that we’ve checked into shows for Zee and now when they come to their higher points, the ratings will pick up. Besides, we’ll be coming up with few a few more fiction shows later, but it’s too premature to talk about them now.

You are currently sitting comfortably at the third spot in GEC ratings. What’s the bigger challenge for you – holding on to this third spot or climbing back into the top two?

I think they (BARC) reported rural as a group (aggregate), so, if they’ve looked at rural with south and north all mixed together, then that’s possible. But overall, regional viewership will always have an upper hand.

Digitisation in Phase 3 markets could open up about 80 million homes in rural India. Traditionally, Zee has been a strong player in the Hindi heartland. Will digitisation enable Zee to reach out this population?