In order to circumvent the a la carte restriction, the petition alleges that DEN illegally transmitted the movie on one of its local channels, DEN Cinema, which is available to its entire subscriber base 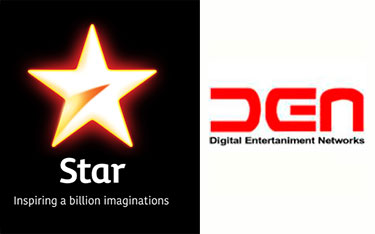 In order to circumvent the a la carte restriction, the petition alleges that DEN illegally transmitted the movie on one of its local channels, DEN Cinema, which is available to its entire subscriber base

The DEN Networks and Star India legal tussle over outstanding dues further intensified after the broadcaster filed an application with the Telecom Disputes Settlement and Appellate Tribunal (TDSAT), accusing DEN of pirating the signal of Star Gold during the world television premiere of ‘Bajrangi Bhaijaan’ on October 11, 2015. The Salman Khan-starrer had aired exclusively on Star Gold at 12.30 pm.

In the application it is alleged that the petitioner (DEN Networks) is indulging in rampant piracy of some of the respondent’s (Star India) channels. Star Gold is available on DEN Networks only on a la carte basis. In order to circumvent the a la carte restriction, the petition alleged that DEN illegally transmitted the movie on one of its local channels, DEN Cinema, which was available to its entire subscriber base.

It may be noted here that Star had made a similar complaint (MA No.369 of 2015) earlier on October 14, 2015. At that time, the counsel for DEN had stated that he would take instructions and make a proper response to it and the matter was fixed for November 3, 2015. Even before that date, Star has filed a new application concerning the ‘Bajrangi Bhaijaan’ telecast. Both the earlier application and the present application (M.A.No.385 of 2015) are supported by screen shots and CDs.

The tribunal, chaired by Justice Aftab Alam, held that prima facie it appeared to them that the petitioner was indulging in practices that were not only not sanctioned by law, but which might constitute a criminal offence. Hence, they have warned DEN to forthwith desist from such activities and not to transmit any of Star India’s channels available on the petitioner’s network on a la carte basis on any of its channels available in any bouquets.

It was further made clear that the respondent, if so advised, might file claim for damages against the petitioner for allegedly having indulged in piracy of its signals.

As is known, in September 2014, Star India had complained to TDSAT about DEN not paying their dues. The MSO had argued that the broadcaster had included the 27.5 per cent tariff hike in its invoice reports. The broadcaster had blocked all its signals to DEN and even published a notice on national daily urging DEN subscribers to shift to new networks.