With a keen focus on creating a ‘MindShift’ towards the way digital solutions are provided across the globe, Randal’s strength lies in his ability to merge insights, ideas and outreach 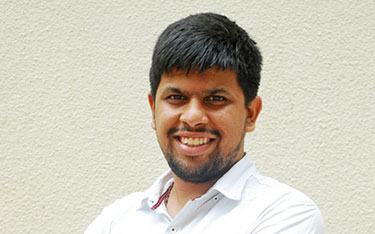 With a keen focus on creating a ‘MindShift’ towards the way digital solutions are provided across the globe, Randal’s strength lies in his ability to merge insights, ideas and outreach

The core strength of Randal Gomes, Creative Lead at MindShift Interactive, is his creative vision – creating the right look and feel, and tone of a brand in the digital space. He has been a leading factor in innovative campaigns such as #FeelingBlue for Reliance 3G, HomeShop18’s #MakesMeHappy, and recently, Practo’s #DoctorsDay and #LifeMein campaigns.

With a keen focus on creating a ‘MindShift’ towards the way digital solutions are provided across the globe, Gomes continues to leverage insights on behavioural and digital trends to understand the need state and create innovative solutions in the digital realm.

On his journey in the creative world so far, he remarked, “My growth has been parallel to MindShift’s. Being one of the first few members, I’ve had a chance to grow and come a long way along with the company. An opportunity to divulge into the executional front of digital marketing to now leading strategy, I have a stronger hold on being able to merge insights, ideas and outreach.”

Success of campaigns like Bombay Store’s #ChappalMaaro, Reliance 3G’s #FeelingBlue, and Practo’s #DoctorsDay have been the key turning points in his journey, driving confidence in the ability to not just create a campaign but to create something the consumers could relate to.

Gomes stumbled into the digital space by chance. He ?graduated with a degree in Mass Communication, specialising in Advertising, but had a passion for what platforms like Facebook and Twitter could do. “After a few ‘fail’ jobs, I needed a MindShift (pun intended), and that’s what I got,” he said, adding, “Working in the digital industry is quite unique – your brand is like a Bollywood celebrity.  If your work is good, you’re showered with roses, if not, they’ll diss you out until you exit. That unpredictability really attracted me the most.”

“It’s amazing. One thing you’ve got to love about the digital world is that it is constantly changing and doesn’t give you the chance to be redundant. One day you’re working on some brilliant digital videos and the other, you’re spinning your head around a cool new feature launched on mobile and figuring out how a brand can capitalise on it too. In the digital world, you have to be updated and relevant constantly. The first one to capitalise on a trend is the brand that will lead the way,” he pointed out.

Though at this point Gomes found it difficult to imagine a career other than digital, he said that had his life not veered towards digital, he would probably have done something in sports – either playing a sport professionally or doing something behind the scenes. “Luckily, I’ve had the chance to work on digital campaigns for various sports brands, so that’s taken care of too,” he added.

Speaking about some of his best works, Gomes said, “We chase insights as a company and that has helped us garner some excellent campaigns over the past few years.”

Reliance 3G’s #FeelingBlue, which trended worldwide for two days, and The Bombay Store’ #ChappalMaaro, which trended and was in the news, were some of the campaigns that made MindShift Interactive stand out as a leading insightful digital agency within the first few months of its operation. “They will always be close to my heart,” Gomes said.

He further said, “Recently, we capitalised on the growing trend of Emojis for Za Beauty, asking users to tweet through Emojis instead of words showcasing what #TrueBeauty meant to them. We also created two extremely successful campaigns for Practo – one on the lines of #Lifemein that announced their TVC and #DoctorsDay, wherein we got over 2 million users across social media to recognise and appreciate their favourite doctor.”

A firm believer of the fact that whatever you do on social media must have a sense of fun to it, Gomes feels that it is, after all, why consumers got onto it in the first place. With every campaign that he is a part of, he ensures that there is an element that keeps it light and interactive, while at the same time allowing the business angle to be looped in.

At MindShift, the high points have been his personal growth and the ability to grow the company by contributing towards some of the biggest pitches that the agency has done and closing them independently. From starting off as a social media executive to a content writer to a strategist to now leading a team of creative individuals, Gomes feels it has been an excellent growth.

Digital in the future

According to Gomes, the digital domain would evolve ten-fold in the future and added that “MindShift and I will be leading it!” He further said, “We’ve started off on the right foot, ensuring we merge insights with whatever we do and that will continue to keep us ahead of the curve. I feel it is the responsibility of the agency to work as partners with their clients, nurturing them into understanding, accepting and growing their digital presence. Educated moves will help the industry grow in the right direction, allowing enough space for thoughtful players in the market.”

Travel, sports and pushing for more

While digital is his passion, it is not all work for Gomes. Travelling is something that’s very close to his heart and he makes it a point to head out of town whenever he gets the opportunity. The beach is the one place that helps him get away from the madness. Besides, he loves watching and playing a whole bunch of sports.

Gomes’ advice is not to rest on one’s laurels and keep pushing for more. One of his biggest learnings has been, “Don’t let a bad campaign, bad clients or bad budgets stop you from being MindShiftin’.”