The corporate initiative, ‘Your Voice, Their World’, conceptualised in association with National Association of the Blind, aims at creating India’s largest audio library of poems for the visually impaired 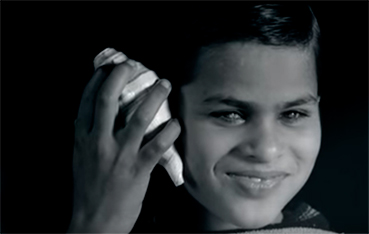 The corporate initiative, ‘Your Voice, Their World’, conceptualised in association with National Association of the Blind, aims at creating India’s largest audio library of poems for the visually impaired

In 2014, McCann Health India launched a corporate initiative called ‘Your Voice, Their World’ for their client Omron India, in industrial automation. Conceptualised in association with National Association of the Blind (NAB), Delhi, ‘Your Voice, Their World’ is a one-of-its kind online initiative that aims at creating India’s largest audio library of poems for the visually impaired. Last year, the campaign garnered rave reviews and won McCann a Bronze Clio award and a silver Effie award.

This year, McCann Health decided to take the campaign to the next level. They brought together Omron India and eBay India to begin the third edition of the campaign. Beginning October 5, 2015, they launched a campaign which enables people to use a new form of currency to pay for their purchase on eBay – their voice – #paywithyourvoice.

Not only does this create a whole new experience for online shoppers when they pay with their voice, it also benefits the 15 million visually impaired in India in the form of hundreds of poems being recorded through this initiative. People can select from a vast collection of pre-recorded poems or choose one from their own collection and record it online at www.yourvoicetheirworld.com. In return, they earn gift vouchers from eBay, thus allowing them to #PayWithYourVoice.

The campaign launched with a funny take on beloved poets with a connect to online shopping. This modern take was much appreciated across the digital space.

The campaign, being promoted on social media platforms, has witnessed submission of more than 600 recordings so far. With this, the total recordings now stand close to 3,400 and it was trending No. 1 on Twitter in India for a day and was also trended globally briefly. The portfolio also boasts of audio recordings contributed by the likes of Dia Mirza, Juhi Chawla, Atif Aslam, Anupam Kher, Sona Mahapatra, Rahul Bose, Amrita Puri, Rohan Joshi and many more celebrities.

According to Takuichi Shimizu, President, Omron Management Centre of India, “Riding on the corporate philosophy of working for the benefit of society, this online campaign is an effort to further strengthen the company’s support to the visually impaired to help them fulfil their dreams of education and overall development via audio-based accessible content. Omron decided to use technology to contribute towards the cause by setting up a library of audio books with NAB Delhi in 2013. Believing that visually impaired people have the same needs of ‘edutainment’ as any other normal human beings, this online initiative is an extension of the project focusing on creating a database of meaningful poems.”

Speaking about #PayWithYourVoice, Shivani Dhanda, Head - Marketing, eBay India, said, “In this fast-paced, target-oriented, corporate world, it’s very easy to forget the community and give back to it. Omron’s noble initiative, ‘Your Voice, Their World’, is an opportunity to do a great deal of good and make a lasting impact on the world. Being an e-commerce that cares, eBay India has embraced the initiative to ensure good poetry reaches the 15 million visually impaired in India.”