Titled ‘Khushiyon Ka Jackpot’, the campaign by Leo Burnett is a refreshing expression of the sheer joy a family feels at the purchase of a new bike 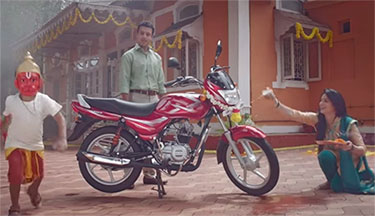 Titled ‘Khushiyon Ka Jackpot’, the campaign by Leo Burnett is a refreshing expression of the sheer joy a family feels at the purchase of a new bike

In an attempt to create more happy commuters, Bajaj Auto has unveiled a new campaign for Bajaj CT100, its entry level commuter bike. The campaign launch comes after the much anticipated relaunch of the bike across markets in India. The auto major has sold as many as 150,000 CT100s in less than 100 days of the bike’s relaunch.

Titled ‘Khushiyon Ka Jackpot’, the campaign by Leo Burnett is a refreshing expression of the sheer joy a family feels at the purchase of a new bike. It highlights how a new bike brings happiness to a family that has made a decision to go mobile for the first time.

The film opens on the outside of a house in a small town in India where the festival of Dussehra is being celebrated. A man on his new CT100 bike smiles as his wife breaks a coconut to welcome the new acquisition. Their little son is equally happy, but moves away from the scene to watch the burning of the effigies of Ravana. But he is unable to a get a sight of the burning and plonks himself down on a small rock. His father comes to the scene with his bike and takes him for a ride to a hilly terrain. Soon the boy is delighted as he realises that his father has just got him the best seat in town to watch the spectacle unfold.

Sumeet Narang, Vice-President – Marketing, Bajaj Auto, commented, “CT100 has been one of the most successful motorcycle launches in 2015. Having already established its impact in a span of just six months, it is time we build on the momentum and make CT100 an undisputed leader in the entry level commuter segment. In a segment that is riddled with communication talking about product benefits, this new campaign takes a differentiated stand by focusing on the intangible aspect of life – that is the happiness that comes homes with the first two-wheeler. I’m sure this creative will succeed in a big way by creating a strong emotional connect with the consumer, thus making CT100 the No. 1 choice amongst the Indian populous.”

Elaborating on the creative thought, RajDeepak Das, Chief Creative Officer, Leo Burnett India, said, “For an Indian family, purchase of a first bike symbolises progress and prosperity. It gives them a sense of joy, happiness and the hope that they would continue to move forward strongly on the path of success. With this campaign, we wanted to demonstrate that and bring alive the emotion of happiness and the spontaneity that a new bike brings to an Indian family.”

Apart from TV, this campaign will be supported by press and digital. Leo Burnett’s focus will be to make #KhushiyonKaJackpot a sustainable property for the brand.