The campaign, conceptualised by FCB Ulka, captures a few dimensions where women are excelling and how Amul Milk is the perfect source of energy for all the go-getter women out there 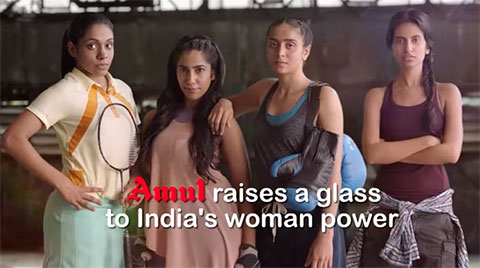 The campaign, conceptualised by FCB Ulka, captures a few dimensions where women are excelling and how Amul Milk is the perfect source of energy for all the go-getter women out there

Today, more than ever before, we see women at the forefront of myriad fields. The Indian woman is pushing her limits, redefining boundaries, and subsequently earning herself top position in everything she does and making her presence felt. Recognising this role of women in our lives, Amul raises a glass to women power.

Women are now fiercely ambitious and are proving their mettle not only on the home front, but also in their respective professions. The campaign, conceptualised by FCB Ulka, raises a toast to these women and portrays how milk energises them to go about their life and shine. The film captures a few dimensions where women are excelling like entertainment, sports and engineering.

Milk is the world’s original energy drink and its benefits to our mind & body are well-acknowledged for generations. Amul Milk packs in all the goodness of milk, making it the perfect source of energy for all the go-getter women out there. The tonality of the film too is honest and real, depicting real effort and real action.

Commenting on the campaign, RS Sodhi, Managing Director, Gujarat Cooperative Milk Marketing Federation (GCMMF), said, “We are happy to demonstrate the role of women in the advancement of our society. In fact, Amul is a brand which has been built on women empowerment over the last seven decades. Our campaign, ‘Amul Doodh Pita hai India’, is very popular across the country and we are confident that this creative will further propel the brand.”

Haresh Moorjani, Executive Creative Director, FCB Ulka, and creator of the earlier campaigns on Amul Milk, said, “Historically we have seen that there is a strong association between a country’s progress and how it treats its women. Today, if we are where we are it is solely because of the role women play in our lives – at home and outside. Taking this forward, the Amul Milk campaign is an ode to the Indian woman captured in the track that says ‘Aage aage badta hai India. Amul Doodh Peeta hai India’.”

The film was launched on YouTube and has received great response in just four days of its launch. The film will also be airing on TV soon with a high decibel media plan.