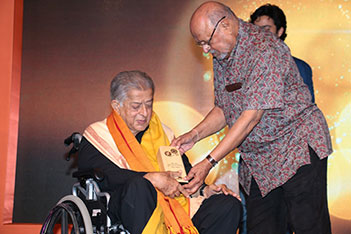 The 6th Jagran Film Festival concluded in Mumbai with a star-studded awards night. Eminent personalities of the film industry gathered to witness members of the film fraternity getting acknowledged and applauded for their cinematic achievements across 25 award categories.

Veteran actor Shashi Kapoor was conferred the Lifetime Achievement Award at the event by Shyam Benegal.

Neeraj Ghaywan was honoured as the Best Debut Director for his maiden attempt in the internationally acclaimed Indian film ‘Masaan’. Award for Best Screenplay went to Juhi Chaturvedi for her work in ‘Piku’. Pooja Ladha Surti won the award for Best Editing for ‘Badlapur’. Sanjay Wandrekar and Atul Raninga won laurels for Best Background Score for their musical creation in ‘PK’. Best Sound Design was bagged by Anish John for ‘Asha Jaoar Majhe’ (Labor of Love). Pankaj Kumar’s discerning eye behind the camera in ‘Haider’ bagged him the Best Cinematography Award. Jyoti Nooran won the Best Singer Female Award for her melodious renditions in ‘Tanu Weds Manu Returns’ and Sukhwinder’s musical notes in ‘Haider’ bagged him the Best Singer Male Award. Vishal Bharadwaj was declared the Best Music Director for his compositions for ‘Haider’.

Special Jury Awards went to Vicky Kaushal for his performance in ‘Masaan’ and Gajendra Ahire for his film ‘Postcard’.

Director Sachin Kundalkar’s Hindi family drama ‘Rajwade And Sons’ as the closing film concluded the film screenings of this stupendous film extravaganza at the 6th Jagran Film Festival. Besides being the film’s World Premiere, the presence of the entire lead cast made the momentous screening extraordinary.

Manoj Shrivastava, Strategic Consultant, 6th Jagran Film Festival, commented, “This year’s Jagran Film Festival exceeded its own benchmarks and reached a point where it is looked up by the film fraternity as well as film enthusiasts as the largest travelling film festival of the country. We are thrilled with the success and response and promise to be back next year with an even grander version of glitz, glamour and cinema.”The 6th edition of the Jagran Film Festival was scheduled from September 28 to October 4 at the Fun Cinemas in Mumbai.