Had he not been in advertising, this young digital native would probably have been a photographer or a film-maker 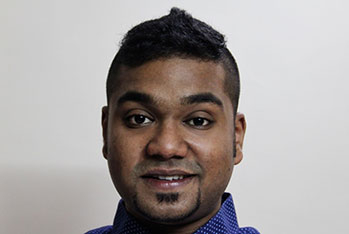 Had he not been in advertising, this young digital native would probably have been a photographer or a film-maker

That hard work and success go hand-in-hand is truely personified in Abhishek Chandran, Head, Social Media at Maxus (West). This young and passionate creative has earned every bit of his success in the high competition ad world, including a Gold in the Young Emvies of the Year category for his exceptional work on Vodafone and Tata Sky.

With specialisation in Content Generation, Digital Media, and Video Content, Chandran joined Maxus two years back in March 2013. His areas of interest include technology in marketing and pondering about the purpose of existence. He currently leads the Social Media vertical at Maxus’ Mumbai office, where he has had the opportunity of working on some of the best brands in fashion, automobile, telecom, and technology, such as World Gold Council, Fiat, Vodafone, LinkedIn, Platinum Guild India and Tata Sky.

Speaking about what made him join the ad world, Chandran says, “It is the creativity and innovation that made me enter this world. From digital intern to cinematography and photography – I have tried and explored a lot of spaces.” He started his career as a Junior Copywriter in Cartwheel Creative, where he wrote copy for clients like Reliance, UTVi, www.investorspremierleague.com, and more.

Prior to Maxus, he was Social Media Manager at Tonic Buzz, where his core responsibilities included management of Social Media campaigns, supervision and training of the SMO team, multi-platform digital solutions, social media audits, and business development. “The functions ranged from management of design and application development, video production, viral seeding, and being the administrator of a blogger network,” he adds.

He has also worked as an Artist Manager at Phat Phish India, where he used to handle web promotions for artists and gig hunting.

During the early stages of his career, he also worked as a freelance Assistant Director and directed a first-of-its-kind ‘rockumentary’ on the journey of the band Euphoria since its inception in 1998. The same aired on NyooTV.com under the name of ‘Hind Rock N Roll’. He then went on to explore the digital world in Adfactors PR as a Digital Intern, working on social media and viral marketing initiatives for Barclays Premier League.

He says, “In my previous role, I’ve been fortunate enough to have worked across 20+ brands on social media such Mercedes-Benz, NBA and Pantene, to name a few.”

An avid photographer, Chandran has also freelanced as Director of Photography for brands like Intex Mobile and Aashirvaad Ready Meals.

“From the days of college when I was studying mass media, there has always been an inclination towards this field. The basic thought of doing something that would attract people and make them stop by to have a look had been on my mind and what better field than the ad do that. Today, I have given more than six years, including media and advertising, and I have seen a lot of changes taking place,” he says.

He further adds, “Interestingly, I was the first person from my family to explore the media world. I had always wanted to do something different. Initially I was confused, hence I explored quite a few fields, but later on I knew how and where to get in.”

Had he not been in advertising, Chandran would probably have been a photographer or a film-maker.

He feels that this year some of the best works revolve around Tata Sky. Talking about his Emvies win, Chandran said, “We were supposed to submit three case studies from last year for this entry and I presented this one too. This particular one, ‘Game of Torrent’, had won a lot of Golds and other awards. It made Tata Sky Client of the Year too. This campaign is really close to all of us because we all are fans of ‘Game of Thrones’.”

Apart from this there was a campaign for Vodafone, called ‘Fancam’, which the brand had been doing for the last couple of years during the Indian Premier League about which Chandran was really confident. “I started working on this campaign during my initial days at Maxus. The scale of the campaign is really big. We wanted to make the consumers re-live the whole in-stadium feelings as watching a match in a stadium is one of the big things for a cricket fan,” he reminisces. The brief was to create something that engaged all the fans during IPL. “With this we wanted to create a first of its kind initiative and I guess we succeeded too,” he adds.

He feels that a value that any individual could bring for any organisation is through their actions that would add to the growth of that particular organisation. He further adds, “Another important thing is the way you work with the team. As per my bosses, the thinking that I bring to the table is what is really important and valuable for them.”

Being a digital native, Chandran has been able to get what the consumers think today and that plays a vital role for any agency while working a campaign.

What next in the media world?

With increasing competition and rise of mediums, clients, consumers and agencies are finding it tough to stand ahead of the curve. When asked where he sees the industry heading in the coming years, Chandran says, “Digital is going to evolve and innovate more. Everything we do today in the real or online world is about being connected with our friends, peers or consumers. Undoubtedly, it would become difficult for a brand to add the necessary value to its consumers in such an evolving world, but that is what will make the industry interesting in the next few years.”

According to him, “We all would be moving in a difficult and a challenging space, but it would be great working. If the agency and its team has a set vision and mission, then it will be interesting to see the amazing works coming out of their kitty.”