This Raksha Bandhan, gift your sister a cuss-free world

Conceptualised by Ogilvy & Mather, Postpickle.com has an important message for brothers – stop using the cuss word “behen****” as it demeans all the sisters 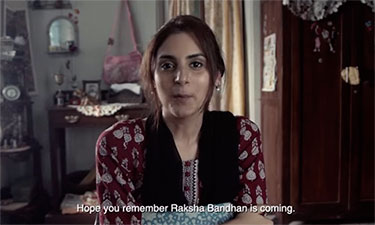 This Raksha Bandhan, gift your sister a cuss-free world

Conceptualised by Ogilvy & Mather, Postpickle.com has an important message for brothers – stop using the cuss word “behen****” as it demeans all the sisters

Raksha Bandhan is a very active time for brands. Everyone is nudging consumers; suggesting perfect gifts for the occasion. In this clutter, Postpickle.com has launched a web film with a rather unique message. The communication created by Ogilvy Mumbai urges brothers to give up the use of the cuss word “behen****” as the ultimate gift.

The film shows a sister recording a message for her brother, where she fondly remembers all the gifts that he has given her for Raksha Bandhan over the years, which she has carefully preserved. She then asks her brother for a special gift this Raksha Bandhan – that he give up using the cuss word “behen****”.

Harshad Rajadhyakasha, Executive Creative Director, O&M Advertising Mumbai, commented, “The idea was to get men to think twice before dragging sisters into their fights. The word is used so commonly that people don’t even give a second thought to its meaning. We want people to give that second thought. It would truly be a difficult but worthy gift for a sister.”

Kainaz Karmakar, Executive Creative Director, O&M Advertising, Mumbai, added here, “The campaign launched on Friday (August 21, 2015) and we have been overwhelmed by the response. We expected women to react warmly to the film, but all the positive responses from the men have surprised us, in a good way of course.”

“Hopefully, these will translate into enough pledges,” said Abhik Santara, Senior Vice-President, O&M Advertising. “We have almost started to use the word as a filler – the gravity of it is seldom realised. To make matters worse, it cuts across geographies and SECs, albeit with its own regional twang. I am sure this eye-opener will make people hesitate before using this word,” he added.

It is a nice step, say experts

Prathap Suthan, ?Managing Partner and Chief Creative Officer, Bang In The Middle, commented, “What a delightful film! I am sure this thought has occurred to many of us, including me.” He recounted his own attempt to highlight the issue by putting up a cover photo on Facebook, called ‘No MC. No BC’, during the Delhi siege after the Nirbhaya incident. However, it didn’t find traction. “It told me one thing, that changing and even wanting to acknowledge our personal flaws is perhaps far more difficult than pushing brands,” he observed.

Continuing further, he said, “An emotional appeal like this film perhaps will cut deeper. And to those who have sisters particularly, it will make an impact. However, my fear is that it would end up as a temporary rein and not a permanent solution. People aren’t even conscious when they say it. It comes automatically. It’s as fluid a word as the infamous ‘F’ word. And usually said without invoking the true meaning of that word. More importantly, this is rampant across both men and women.”

“But yes, the film is a genuine attempt to curb something so simple yet so terribly wrong. Indeed, it can be a gift. But in order to have a more powerful impact, it needs to reach the masses, because that’s where this word truly gets used more times in a day,” Suthan added.

ECD, Innocean, said, “I feel it is one of the path-breaking steps that a company can take. This word is being used quite frequently and people do not understand what they are saying, and on an occasion like Raksha Bandhan, when your sister urges you to stop using that word, one feels really sad. This advertisement is surely going to create a wonderful impact. Also, people in advertising and marketing world forget that even they have some responsibility towards the society, but with something like this is great step towards changing the society. The film will surely trigger the change.”