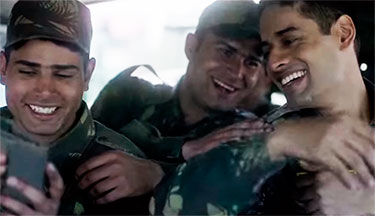 The film follows the journey of a soldier from his military base in the north down to his home in the beautiful backwaters of Kerala. With the intention of fulfilling the final wish of a fellow soldier who died in the line of duty, he makes an emotional stop en route to his colleague’s family home, where he hands over the martyr’s belongings to them.

The story traverses several situations and people that cross the soldier’s path closing with a touching moment of a family reunion. Here the film cuts to a national issue that requires the protagonist to return to his base camp.

The film highlights India’s incredible landscape and its multicultural beauty, juxtaposed beautifully with the personal sacrifices a soldier makes for his country, family and friends.

Qyuki roped in Razy Ghai from Asylum Films to direct and Dhruv Ghanekar of Wah Wah Studios to score the music for the film.

Speaking about the campaign, Debabrata Mukherjee, VP - Marketing & Commercial, Coca-Cola India and South West Asia, said, “Thums Up has always stood for strength and a spirit of inspiration. We believe that real heroes are the ones who have inner strength and compassion. This Independence Day, we wanted to celebrate the protectors of our independence, the ‘True Heroes’ of our nation. We wanted to salute the sons of the soil for their undying spirit and indefatigable courage.”

He further added, “It gives us great joy that the effort has received such a heartwarming response. In just 48 hours, the film has been seen over a million times on social media; a clear reflection of the nation's love, appreciation and respect for the real heroes who keep us safe, everyday.”

Samir Bangara, Co-Founder and MD, Qyuki, added here, “Qyuki is proud to present this film along with an iconic brand like Thums Up to salute the country’s true heroes. Having grown up as armed forces kid the film is that much more personal and special to me.”

Razy Ghai commented, “As the son of a retired Army officer, I’ve always wanted to give back to my roots. Soldiers are the unsung heroes of our country. I think we have managed to touch an emotional chord with this short film. The idea was to do a road film in which a responsible soldier goes on this soulful journey. The film is supported by the ‘Saare Jahan Se Acha’ tune playing in the background to remind the viewers of what the soldiers of our country do for us.”