Is gender sensitivity coming of age in Indian advertising? 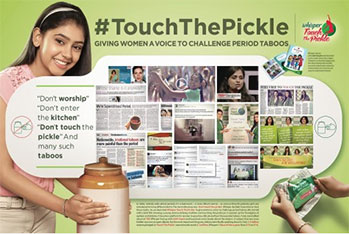 Is gender sensitivity coming of age in Indian advertising?

India’s Glass Lion wins at Cannes Lions this year lent some respect to the country’s metals tally and brought much cheer. As is known, Glass Lion: The Lion for Change specifically recognises work that challenges gender bias and shatters stereotypical images of men and women which remain rooted in marketing messages. Therefore, the Grand Prix for P&G’s ‘Tough the Pickle’ campaign and Glass Lion for Ariel Matic’s ‘Share the Load’ campaign are being seen as perhaps heralding a new era of gender sensitivity in Indian advertising.

Gender stereotypes abound in Indian advertising – be it for deodorant brands for men, which present women in a highly sexualised manner, or a plethora of ads in the FMCG, household electronics and other sectors, which present women as homemakers fretting over their family with no life of their own. The less said about the fairness cream ads the better.

Even a brand like Airtel couldn’t break out of this stereotype. One would recall the ‘Boss’ ad, where the senior executive wife, who is her husband’s boss in office, still goes home and prepares dinner and waits for him to come home.

In contrast, there was an ad in Raymond’s ‘The Complete Man’ series, which showed a working couple about to set out for office, when their child starts to cry. It is the husband who decides to stay back and comfort the infant, even as the wife drives off to work.

Myntra recently came out with three ad films that present women in non-stereotypical roles, including a lesbian couple and a single mother, which have been well-appreciated by all.

Tanishq’s ads too have sought to break stereotypes. The latest ad featuring Katrina Kaif shows the actress asking women to marry only when they are ready for it and not due to social pressures. The jewellery brand’s ‘Second marriage’ ad also broke norms by showing a woman with a child getting married for the second time. And the model chosen for the bride’s role in the ad was not your typical fair-skinned, straight-out-of-the-fashion-magazine beauty.

The examples are growing, but do they signify a change in attitudes and outlook? Are advertisers and agencies beginning to show greater sensitivity towards gender depiction in their ads? Or is the advertising industry yet to come of age as far as gender sensitivity is concerned? BestMediaInfo.com spoke to a cross-section of industry experts to gauge their reactions.

According to Josy Paul, Chairman and Chief Creative Officer, BBDO, the agency behind the ‘Touch the Pickle’ and ‘Share the Load’ campaigns, “The Glass Lion is a fantastic idea because it responds so sensitively to our times. It shines the light on gender equality issues and on things that really matter. It is about marketing that questions stereotypes while driving business results.”

“What gives us immense joy is that both our movements that won the Glass Lions were mainstream ideas that had a transformational impact on the brands. These ideas embraced socio-cultural tension points and found creative ways to resolve them. They fuelled a conversation, changed behaviour and drove a significant increase in sales. For us, this represents where advertising is going,” he added.

Paul further said, “This is not just a creative award. It’s a Grand Prix for bravery and it rightfully belongs to the client team. It inspires us to create more acts, not ads. As you know, BBDO India has won every inaugural award at Cannes since inception – the PR Lion, the Creative Effectiveness Lion and now the Glass Lion Grand Prix.”

KV Sridhar, ?Chief Creative Officer, SapientNitro India, opined that the effort was to break the norms and prejudices that people had been living in. He noted, “Advertising has come a long way and has changed a lot. This is just the beginning of a new change and I think with society taking a new route to all the prejudices, things are bound to improve. More than that, if the brand is able to create a change by standing up, then the change is going to influence.”

Adding further on how the treatment plays a vital role with bolder narratives, Sridhar said, “It has changed quite drastically. A campaign is all about treatment, and if big brands are able to treat the bolder concepts subtly, then the message will be disseminated in a better way. Also, if powerful brands take a step then smaller brands can follow the league to come up with something commendable.”

Prathap Suthan, ?Managing Partner/ Chief Creative Officer, Bang In The Middle, remarked, “Both the films are flickers of change. This is not something that advertising is driving. I have a feeling that social media, and the opportunity of social media for both women and men to drive gender sensitivity, is powering this change organically. Advertising, while it used to be the leader of change and catalyst of influence, has now become reduced to a mirror. It merely reflects what's going on, and not what it needs to be. But the process in a country that is loaded against what ought to be gender equality as a norm, is slow.”

“Change and sensitivity need to come from every individual and every home. We can shout ourselves hoarse, but unless the trickle is amplified and made to a cascade, things will continue. I am not worried about this change in urban scenarios. But the larger India, where liberal thinking and open thinking still doesn’t reach, is going to stay dark and continue to create issues for our nation. Pity that our political will to affect and effect these necessary changes is perhaps deliberately invisible,” Suthan added.

Ayesha Ghosh, Senior VP and GM, Contract Mumbai, remarked, “We are influenced by what we see around us. Bollywood is a powerful influence, for instance. Therefore, quibbles aside (quibbles such as this - While ‘Touch the Pickle’ is a movement towards social change and obviously took some putting together, was the central idea really award worthy and so on), these various pieces of communication that are depicting progressive gender portrayals will help shape the collective consciousness.”

She further said, “My experience while handling Star Plus has shown that people tend to use television as a moral compass. We will not see change overnight, but we will start seeing shifts.”

On the changing world of advertising, Ashish Khazanchi, ?Managing Partner at Enormous, said, “It is all about the changing times that we are living in. With more and more brands using mediums like social media the treatment and concept seem to change as these mediums would not propel the message if it is just a pure play of the product. This medium is much more evolved in nature. With brands sharing content on social media they create an identity and badge hence there has to be a strong concept.”

Satish deSa, Executive Creative Director & Creative Head, Soho Square, Mumbai, opined, “It is the brands that wish to connect with a more evolved audience that are showing greater sensitivity. For every one of these brands there will continue to be a hundred brands that will stick to gender stereotypes, more out of business compulsions than anything else. After all, a big part of India is gender biased. And antagonising this India is not on the top of every brand’s agenda. But the change has begun. The success of brands like Whisper ‘Touch the Pickle’ and JSW ‘Will of Steel’ is encouraging more brands to push their own limits.”