Conceptualised by McCann, the new campaign titled ‘They Listen To Me’ comprises a set of five TVCs that promote the app’s social features 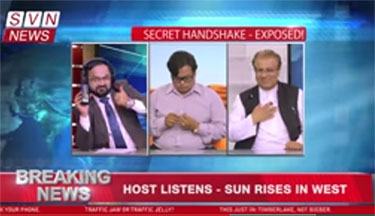 Conceptualised by McCann, the new campaign titled ‘They Listen To Me’ comprises a set of five TVCs that promote the app’s social features

Music streaming company Saavn has rolled out a new campaign with ad film visionary and lyricist Prasoon Joshi. Saavn has collaborated with Joshi and his team at McCann to help drive the music company’s evolution as one of the most innovative advertising voices across India’s top technology brands. The first campaign created under the association is on air now and features a comical series of five spots that promote Saavn’s innovative social features – Tag, Chat, Follow, and Share.

Saavn’s previous campaigns, featuring actor Ranbir Kapoor, were launched in India and select international networks and generated more than 7 million combined YouTube views, while attracting millions of new users to the Saavn app. Until now, Saavn’s ad creative had been done entirely in-house. Saavn’s Creative Director Teddy Stern, and Sneha Mehta, Vice-President, Editor and Chief, independently conceptualised, directed, and co-wrote each spot. The new campaign, titled ‘They Listen to Me’, was also directed and written by Stern and Mehta, but this time the duo’s sensibilities and creative execution is combined with the McCann team’s globally-renowned expertise. The result is a unique and fresh concept that builds on Saavn’s history of pushing groundbreaking creative.

“The last year has been pivotal for Saavn as both a brand and advertiser, starting with the Ranbir Kapoor TVC in August. The next step in our brand evolution is collaborating with the immensely-talented Prasoon Joshi and his team at McCann,” Stern said. “Music connects people, and Saavn amplifies that connection. Our app empowers our listeners to share in the joy of music with each other. That’s the Saavn ethos, and McCann is the perfect team to help us broadcast that message to millions of music lovers, in Saavn’s own quirky and innovative way.”

The ‘They Listen to Me’ campaign is a series of five short TVCs, plus creative for radio, theatrical, and digital platforms. The spots demonstrate how people of all walks of life are empowered by Saavn through the app’s new social features. The spots feature multiple genres of music, with tracks ranging from ‘Jumme Ki Raat’ from ‘Kick’ to ‘Uptown Funk’ by Mark Ronson ft. Bruno Mars.

“From concept phase to production, and now to launch, the Saavn team has been a joy to work with on this campaign,” said Prasoon Joshi, CEO and Chairman, McCann Worldgroup Asia Pacific. “When Saavn’s creative team came to us with the idea of empowering users through Saavn Social, McCann’s creative and strategic team knew we wanted to deliver something that not only reflects Saavn’s unique and progressive brand mentality, but also tells the stories of their users – everyday people who have the power to influence their peers on a daily basis through music.”

The five spots range from 20- to 30-seconds in duration and were shot in just three days. Each spot will air in three languages (Hindi, Tamil, and Telugu) for a total of 15 television commercials. The five spots, which will roll out throughout the summer across key networks in India, are titled ‘The Wrestlers’, ‘The Office’, ‘The Professor’, ‘The Newsroom’, and ‘The Dentist’.

The first of the five spots, ‘The Office’, is on air now. And an exclusive look of the campaign can also be viewed today on Saavn’s YouTube channel.