A young entrepreneur who is geared to achieve and conquer her love and passion to create great work for clients, Kahini is an art director by chance and a drummer by choice. And she hopes to make advertising a bit better 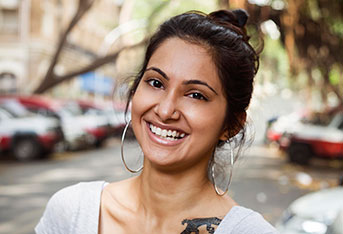 A young entrepreneur who is geared to achieve and conquer her love and passion to create great work for clients, Kahini is an art director by chance and a drummer by choice. And she hopes to make advertising a bit better

Kahini Panjabi, a second generation art director, literally grew up in the creative department as her mother worked at Lintas in the 90s. She hates advertising, but that’s also what drives her to make it better. Panjabi is an art director by chance and a drummer by choice. Very recently, she took a step forward in terms of becoming an entrepreneur by starting acreative agency, Naidu & Panjabi, with another like-minded ad professional, Keshav Naidu.

Panjabi moved to Mumbai from Kolkata for college and there was no turning back. To stay in touch with music, she played with a few rock bands while working at Lowe.

Sharing a few key high points of her journey so far in the creative world, she said, “Launching Naidu & Panjabi is definitely a big one. I work on something out of my comfort zone everyday and reaching the goals I set for myself feels really good.”

A music lover and enthusiast by nature, when asked what prompted her to join the competitive and ever evolving adworld, Panjabi said, “It’s got a lot to do with the fact that I stepped into an agency at a very young age. It was like stepping into a candy store. There was so much energy. It just sucked me in.”  As it is often said, choices, aspirations and destiny do not at times go hand-in-hand. So, had Panjabi not been an ad professional, she would have been a neonatal cardiothoracic surgeon!

A strong believer that the adworld is getting better everyday, especially with the investments in ad-tech, Panjabi feels it is an exciting time to be in advertising. “I’ve really never considered recognition from within the industry as recognition. It’s possibly something Lowe teaches you and I’m grateful for that,” she said, when asked to highlight her awards and appreciation in the adworld.

Giving an overview of her new venture, she said, “Naidu & Panjabi is a creative agency with clients ranging from personal care to hospitality and online grocery retail. We are a band of advertising people who believe we can cultivate brands for growth by way of quality human experiences.”

With increasing demand for creativity, she feels that creativity is spreading horizontallyin terms of the technology being used. “People are exploring newer ways to put messages across, but I feel the quality of the content is sometimes compromised,” she said. Citing an example, she said, “Just because a certain brand is using a particular medium, it doesn’t mean it is right for everyone.”

With so much on the plate and in the kitty already, Panjabi’s plan of action is to create some really good, effective work. No quantitative goals, just qualitative.

During her leisure time, Panjabi can be found indulging in her passion for drumming, horse riding and music. Also, she strongly believes that “scratching an indie pup’s ear is always therapeutic for both pup and humans”.

When asked about the best thing that has happened to her all this while, Panjabi said, “Sometimesbig monolithic agencies tend to put you in an inertia, and starting Naidu & Panjabi has been crucial in helping me break out of that.”