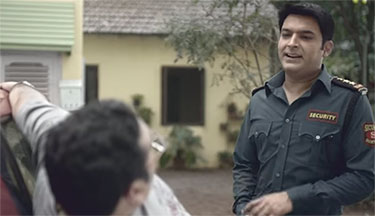 Conceived by Lowe Lintas, the TVC featuring Kapil Sharma depicts a man literally stuck to his used car. Kapil, portraying the role of a security guard, explains that he has been long stuck to it, refusing to let go. The man explains that it was his first car and he doesn’t know what to do with it. Urging him to move on, Kapil takes the man’s phone, clicks a photo of the car, and uploads it on Olx. Buyers start calling right away and the car is sold. The man is seen getting unstuck to his car and upgrading to a bigger one. In his quintessential tongue-in-cheek style, Kapil concludes, “No chipkoing, kyunki Purana Jayega Toh Naya Ayega”.

Amarjit Singh Batra, CEO, Olx.in, elaborated, “The central thought behind ‘Let the old make way for the new’ is that change leads to progress. Only when you let go of the old, you create opportunity for new things to happen in life. People have been selling everything – from household items to cars – on Olx in just a few hours. Olx is the easiest and the fastest way in which people are upgrading these days and bringing about a change in their lives. We hope that ‘Purana Jayega Toh Naya Ayega’ becomes both an incentive for people to let go and upgrade through Olx, as well as a mantra to live by.”

Olx TVCs are known for their originality and have in the past year won the brand several awards and accolades. Earlier this year, Olx won two Effie awards, one of which was for its previous ad campaign with Kapil Sharma. More recently, the brand bagged two Abby awards and another two awards at the Asian Customer Engagement Forum Awards for different brand initiatives. In April 2015, recognising the path-breaking marketing done by Olx, Amarjit Singh Batra was awarded ‘Marketer of the Year’ (e-commerce) by the International Advertising Association - India Chapter.

“‘Purana Jayega Toh Naya Ayega’ is based on our habit of stacking stuff at home which we might not be using. It is only by letting go of the old that you make way for the new. Kapil is the face of the masses. His sensibilities and style are something people relate to. We have used his style in this campaign to put across this message with satire. Olx is a great platform to help us meet people who might be waiting for the exact stuff we are selling,” explained Shayondeep Pal, Executive Creative Director, Lowe Lintas.

“We are not just a local brand, we are a hyper-local brand built by Indians and for Indians. This reflects in our marketing. We were the first Internet company to make regional campaigns in local languages with regional celebrities using colloquial sensibilities and references. We have always been the first-movers in online classifieds, and that’s the reason that our brand today stands for the category itself commanding 85 per cent market share of the C2C trade in the country,” added Batra.