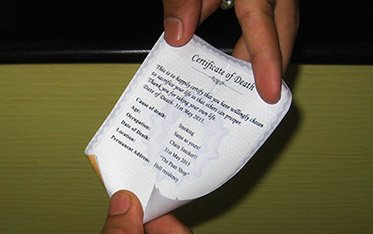 Though smoking in public is a legal offence in India, there still remain several ‘style’ and ‘in vogue’ connotations related to this ill habit about which various Indian and international agencies have been constantly cautioning the society about.

On May 31, 2015, which is celebrated as World No Tobacco Day all over the world, Kinetic India decided to take the issue one step up by just not preaching on the matter, but rather created a distinct way for smokers to get attracted to the kiosk – which had cigarettes kept in a pocket saying, “Free Smokes – who cares about No Tobacco Day”.

This creative campaign was executed  in Delhi, Mumbai and Pune on May 21 and by June 1, thousands of people at the shops actually went ahead to pick up the cigarettes only to realise that they were not cigarettes but ‘Death Certificates’ that were rolled up in the shape of cigarettes. The objective of the campaign was to warn the smokers about their deaths in the near future due to smoking.

Elaborating on the campaign, Amit Sarkar, Chief Operating Officer, Kinetic India, said, “The brief was to create a campaign for No Smoking Day for an NGO, Indian Health Foundation, in three cities of India. But we were sure of creating a creative communication that would not just make people aware of the ill effects of smoking, but also make them take one step ahead to call it quits. And after the two-day campaign carried out at over 100 paan-bidi shops, even if one life is saved by someone quitting smoking – for us our job is done.”