Bringing adventure to urban city life, Woodland taps into urban customers with its new ad film that presents the brand as a perfect mix of function and trend 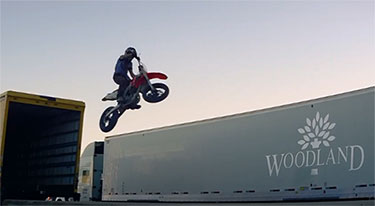 Bringing adventure to urban city life, Woodland taps into urban customers with its new ad film that presents the brand as a perfect mix of function and trend

Woodland has launched its new campaign as they shift their strategy to urban. Woodland is best known as an outdoor brand, but now they want to bring the same philosophy of explorer to urban city life. The film has been directed by Hello Robot, a global visual design and ad production firm with offices in India and the US.

The ad film revolves around two maverick motocross riders as they trail blaze their way across Los Angeles riding across everything, except the city streets. They go off road with their bikes and apply that freedom on the urban landscape.

Amit Gupta, Director, Hello Robot, elaborated, “It was a very challenging production on many levels, productions of this nature often take a year to put together and up to a million dollars in budget. We achieved this in a fraction of the money and time. Each location had to be vetted by our location manager, then revisited by the stunt coordinator and director. Often due to safety reasons we were unable to use the locations and had to start the process from scratch. We had to coordinate street closures in downtown LA and had police escorts through the filming. Some of the stunts performed were extremely dangerous and the stunt teams took days to ensure safety for all the riders. We had support from amongst the best in the business.”

The Stunt coordinator for the ad film, Webster Whinery, has worked on movies such as ‘The Dark Knight’, ‘Pirates of the Caribbean’, ‘Transformers’ and ‘Iron Man 3’, among others.

The music band, The Daylights, who composed the music for the ad film, gave a high octane rock track inspired by the visuals in the film.

With a strong presence in LA, they can give access to celebrity Hollywood talent for direction of Indian ad films. With Indian brands growing to a global style appeal, such a level of quality in ad film making is seeing a growing demand. Hello Robot brings together the best of these two countries – the leading film making capitals of the world to put together cutting edge talent and creativity in ad films.

The ad film successfully brings to life the idea that Woodland is about being different and exploring, whether one does it on an adventure trek or daily city life. It’s the perfect mix of function and trend.