Dipstick: Is profit-sharing the way forward in brand endorsements?

The Maggi controversy has forced a rethink on celebrity brand ambassadors, with industry leaders stating that brand endorsements will become more umbilical in connect both ways. Will this hands-on approach of endorsers lead to greater focus on profit sharing? 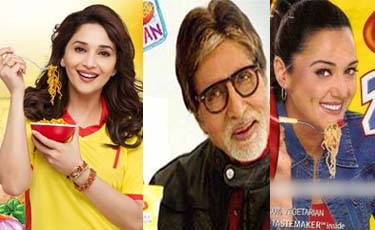 Dipstick: Is profit-sharing the way forward in brand endorsements?

The Maggi controversy has forced a rethink on celebrity brand ambassadors, with industry leaders stating that brand endorsements will become more umbilical in connect both ways. Will this hands-on approach of endorsers lead to greater focus on profit sharing?

Gone are the days when a celebrity endorser was merely a face of the brand and consumers would lap that up. With rising stakes, and especially after the recent Maggi controversy, celebrity brand endorsements are under the scanner like never before.

More than 50 per cent of commercial ad campaigns portray celebrities and the market for celeb endorsements is estimated to be worth over Rs 3,000 crore annually, and profit-sharing may see a rise over traditional endorsements by celebs for brands.

Following the Maggi fiasco, celebrities are bound to take a more cautious approach towards lending their names and faces to a promotion or a brand. Over the last few months in particular, there has been a specific rise in brand ambassadors being involved in products – from conceptualisation through development – rather than just being a pretty face.

With this growing hands-on approach, the question that arises is will profit sharing in brands take over endorsements? BestMediaInfo.com spoke to a cross-section of industry stalwarts to understand the evolving face of celebrity brand endorsements and what it means to the advertising industry.

Celebrity-caution is a reality of the day in India as well today. In developed markets such as the US and Europe, celebrity liability is clearly defined and, therefore, celebrity-caution has been a reality for a while. Celebs employ third-parties to do due diligence on brands, companies and their promoters before signing up assignments. This is happening in India today as well, after the Maggi speed bump.

As celebs get more involved with brands, they put more of their skin in the business. This is helpful to brands. When a brand endorser is seen to be part of the brand effort, the brand benefits and to the celebrity, brand endorsement is no longer a hit-and-run game; it is a longer involvement with his credibility linked to brand credibility. His positive aura rubs off on the brand, just as the positive or negative aura of the brand in question gives him a rub-off. This is a trend ahead. Brand endorsements will become more umbilical in connect both ways. Many categories such as alcohol and cigarettes will cease to get celebrities altogether as well.

Will profit-sharing in brands take over endorsements? Not any time in the foreseeable future. Even in evolved markets like the US, endorsements form a major chunk of an actor’s revenues when compared to profit-share – or equity linked / royalty or licensing deals. In terms of licensing or royalty-based deals – what you define as profit sharing – it’s a concept the Indian market is slowly waking up to. And we will see a lot more equity-based or licensing-based deals in the years ahead. For the celebrity, this works well because they can secure their future and create wealth even post their shortlived professional careers, a blanket of financial security which short-term endorsements will not be able to provide. However, one needs to ensure that such deals are built on strong foundations, which include similar brand attributes between the product and the celebrity, a great product and great marketing of the product. If there is no ‘connect’ seen between the brand identity of the product and the celebrity, the deal will fail. Similarly, if the product isn’t a decent one, no amount of marketing spends and celebrity presence will save it.

From the brand’s point of view, it makes sense to get your bigger A-list celebrities in long-term, equity or royalty-based deals because the brand may not be able to afford the large endorsement fees that most celebrities command in the market today. While brands could lose out in equity or a percentage of royalty in the short run, if the product is successful, then there is significant money to be earned for both the brand and the celebrities. Equity or royalty-based deals are however much more complicated to structure than a normal endorsement; and most times, brands are in a hurry to launch a campaign. Another reason we don’t see too many such deals around is because a celebrity needs to have been around and established himself or herself over a significant period of time. There are very few celebrities today who can carry the weight of a product on their own shoulders.

To sum it up, it is inevitable that the number of equity/ royalty/ licensing deals will increase substantially over the next few years. However, these deals will not replace traditional endorsements anytime in the near future.

Celebrities as brand ambassadors do lend their images and credibility to the brands they endorse. And often, brand endorsements do keep many celebrities in the limelight. Often, celebrities endorse brands they have personally invested in – as Shah Rukh Khan does for Kolkata Knight Riders or Preity Zinta for Kings XI Punjab in the Indian Premier League. I think going forward many celebrities will need to closely examine the brand endorsements they do – both in terms of image fit and ensuring they truly identify with the brands’ attributes. Celebrities cannot walk away from the moral responsibility of promoting a brand that has attributes that may negatively impact consumers. After all, it is these consumers whose adulation they enjoy – who make them celebrities in the first place. Celebrities can only ignore this at their own peril.

I think the celebrities endorsing the product should check the authenticity of it versus the claims that the client makes before getting to make the campaigns. It is our collective responsibility. Not only celebrities, but also the agency that works on the campaign, the marketing guys from the client’s side who keep vital facts to themselves while briefing the agency, the production house that creates the film for the agency and the TV channels that air the campaign and so on and so forth goes the list of people and entities that have to grow more responsible.

In Maggi's case, specifically, I don’t know how a household name that has been around for more than 25 years suddenly became poison. Can’t find a sound reasoning for the fact that the food authorities of India had turned blind and deaf for so many years! It does seem a bit odd.

Diluting the importance or gaining a closer approach towards the smart consumer of today is an ideal change. This makes even the manufacturers become a bit more careful. And I feel that way the consumer also can trust the product more. With more and more celebrities being extremely health and wellness conscious, I wishfully think it may be a positive changeover. Also, as I see the current trends in the sports sector with IPL and Kabaddi League and Football League, it is really positive the way the impact has been on the public and I am sure this is going to be a growing trend. And more people taking the onus is always a better thing for consumers. I just wish they take on more important environmental issues and social issues as well along with the other endorsements.

In the food category, the case of being completely involved with a brand is something that has been going on since a very long time now. I remember one of my first endorsements of a microwave oven, which I had kept with me for over a month in order to ensure that I was speaking only the truth about the brand before endorsing it. Everything is on-ground in this industry and there is nothing that one can hide. Even at present, for any brand that I am involved in, I am always there to discuss and debate at every stage of product development and launch. While other industries may have taken a more cautious approach right now, those working in the food industry would have been cautious from the start.

There is no scope of diluting any importance to the brand or the consumer through an involved approach. It rather means more credibility and interaction with the consumer that will help build more trust for the product. I have always been involved 100 per cent with any brand that I have endorsed. No one can be involved for only the money as they are putting their own brand image on the line. With regards to increased involvement by endorsers, it was bound to happen eventually.