Mythological and historical series have married the contemporary with age-old stories to create a mix that has spelt success for channels. Industry stalwarts share their views on the evolving nature of shows in this genre 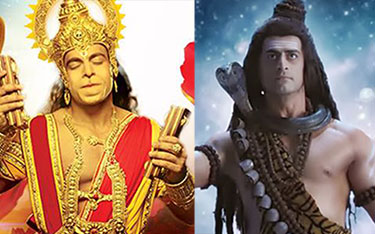 Mythological and historical series have married the contemporary with age-old stories to create a mix that has spelt success for channels. Industry stalwarts share their views on the evolving nature of shows in this genre

Saas-bahu sagas in different hues have been ruling Indian television ever since the advent of private channels, with cricket tournaments providing the occasional break. One genre, however, that has been bringing the entire family in front of television screens has been the mythology/history genre. These are stories that are well-known, are entrenched in Indian culture; yet, whenever they hit the screens, there have been no dearth of viewers.

One would recall how in the glory days of Doordarshan, two epics – Ramanand Sagar’s ‘Ramayan’ and BR Chopra’s ‘Mahabharat’ – brought India to a virtual standstill every Sunday. The lavish sets and costumes, a fairly linear storyline, catchy music and well-etched characters captured the imagination of the entire nation.

Over the years, mythological and historical series have seen grand productions, even more lavish sets, introduction of sophisticated computer generated effects and, to retain viewer interest, have introduced hitherto unknown facets, characters and stories. Broadcasters have time and again returned to the mythology/ history genre to give a boost to viewership and have spared no efforts in marketing such shows.

The latest example of this is the upcoming mythological series, ‘Sankat Mochan Mahabali Hanuman’, which is slated to go on air on Sony Entertainment Television today. In order to create buzz around the show, the channel has rolled out one of its largest campaigns involving a series of on-ground activations as well as using drones in various cities and more.

Manisha Sharma, Programming Head, Colors, elaborated, “Mythology and history are two things that the Indian audiences connect with easily because of the strong influence they have on our culture. India boasts of a rich and vibrant culture, historical testimonies and fables related to mythology. People have always related to them and derive inspiration from them. These stories, which have passed through generations, have ruled Indian television since 1987. ‘Ramayan’ by Ramanand Sagar, incepted in 1987, found success on Doordarshan and is still remembered for its authentic representation. Watching the story unfold in front of your eyes is a more authentic experience for the Indian audience, who has spent their childhood hearing stories of great emperors and divine deities. What grips the interest is the clever replication of the era gone by, by building realism to the sets and costumes, instilling the emotion the characters have to display as part of the drama, and believable execution of the legend/ saga/ narrative.”

This is not the first time that the story of Hanuman is being told on Indian television. Earlier, there have been ‘Jai Hanuman’ (first aired on DD Metro in 1997 and later repeated on Sony in 2008) and ‘Jai Jai Jai Bajrang Bali’ (aired on Sahara One in 2011).

When asked whether there would be a fatigue factor, given that certain mythological stories are well-known, Gaurav Seth, Senior Vice-President, Head –Marketing, Sony Entertainment Television, replied, “Shows in the mythology/ history genre come with their own set of challenges and it depends on the way the story is being told. It doesn’t matter whether any particular story has been told earlier and became a success – such stories will always be successful. However, once a show is a success, it leads to a lot of expectations the next time. So, keeping all this in mind, it becomes really challenging to pick up a story and present it in front of the audiences.”

Seth felt that undoubtedly both VFX technology and marketing played a vital role in creating a good show. “All that can make a show succeed are your marketing strategies, putting a perspective to a show and creating a show that appeals to the audiences,” Seth added.

Along with ‘Sankat Mochan…’, Sony is also gearing up to air a series on ‘Karn’, the tragic character and eldest brother of the Pandavas from the epic ‘Mahabharat’.

One of the mythological shows that has attained considerable success is ‘Devon Ke Dev… Mahadev’ (based on the life of Lord Shiva), which premiered on Life OK on December 18, 2011. The show was heavily promoted across media platforms and created a lot of buzz due to its high production quality.

Bringing some elements of laughter in mythology is ‘Narayan Narayan Chulbulley Naarad Ki Natkhat Leelayen’, which went on air on Big Magic in April 2015. The series is a light-hearted comedy based on Narad Muni as he traverses the universe. Actor, comedian and former RJ Mantra is essaying the role of Narad Muni.

Meanwhile, historical shows have also garnered a major share of eyeballs. ‘Bharat Ka Veer Putra Maharana Pratap’ on SET gained widespread success. So has the historical drama ‘Jodha Akbar’, which depicts the romance between Emperor Akbar and his Rajput Queen Jodha Bai. The series premiered in June 2013 on Zee TV. ‘Chakravartin Ashoka Samrat’, currently on air on Colors, has been climbing the popularity charts. The series is based on the life and times of Emperor Ashoka. ‘Razia Sultan’, a historical series on the first woman ruler of the Delhi Sultanate, is currently on air on &TV.

Siddharth Kumar Tewary, Founder and Creative Director, Swastik Productions, remarked, “Both mythological and historical series are extremely challenging and work as a variety for viewers and they will surely continue on television. However, I don’t believe they are dominating television content, I believe they add a new element to the programming line-up of a channel.”

While commenting on the success factor for the upcoming shows in this genre, Abhimanyu Singh, CEO, Contiloe Productions, commented, “How can one measure a show’s success or failure in advance? If that was possible, then the industry would have had only hit shows. According to me, it depends on how a story is being told and created. Relevance also plays an important role because if the story of the character is not relevant, then the show will not be able to create what it should.”

Colors’ Sharma added here, “In the past, we have explored Veer Shivaji’s journey as a warrior and have witnessed success. Having premiered in September 2011, the show received instant success and popularity and due to popular demand, we also extended the show to five days a week in October 2011. A more recent magnum opus for us that launched in February is ‘Chakravartin Ashoka Samrat’, which has garnered great viewership numbers.”

On the other hand, Seth of SET informed that apart from ‘Bharat Ka Veer Putra Maharana Pratap’, the channel had not experimented with any content in this genre in the recent past. “‘Maharana Pratap’ received a very good response from the audience as that was one story that was known, but had not been told on the television,” he said.

What works for this genre?

According to Sharma of Colors, “Viewers are always on the lookout for novelty. When we worked on bringing ‘Chakravartin Ashoka Samrat’ to the screen, we knew academically about the great king and how he made ‘Bharat’. To make it additionally relevant for our audience, we delved deeper into fables and folklore related to Ashoka. This gave us more insight to make documented history richer and that much more interesting for the audience. The cast shortlisted for the show beautifully fit into the skin of their characters and their performances have been appreciated by audiences across the board. Bringing alive the drama and emotions that work for the audience is what makes creating a historical drama exciting and challenging and rewarding.”

Swastik Productions’ Tewary added here that VFX added a lot of value to recreation. “Without VFX it’s impossible to tell such stories,” he maintained, adding, “Now, we can create what we visualise and VFX adds to the creation, it doesn’t work in isolation.”

Singh of Contiloe Productions also felt that the technology today had evolved a lot and the mythological/ historical genre had used it to great advantage. “With VFX and technology, one can really create a strong property depending on the need and demand of the story,” he said.

Stressing on in-depth research, Sharma said that it was crucial before the show went into production to ensure that there was a definite connect with the target audience of the show simply because of scale of investment that went into making them. “There is a lot of work that goes into creating the sets, costumes, jewellery, and outdoor shoots to build an authentic backdrop for the show. Therefore, it is important to not only weigh the pros and cons of creating a large-scale show but also narrow down upon what works for the show,” she added.

Speaking on ‘Chakravartin Ashoka Samrat’, the Colors Programming Head said, “When we created the show, we invested judiciously in the cast, the story and the sets, and the formula worked well for us. While the show does gain sustained viewership week on week, what also determines success is how the characters have been able to connect with the viewers. For example, in a span of a month post launch, our lead Siddharth Nigam, who plays Ashoka, moved up to the third position in the Ormax Characters India Loves report in March 2015.”

Thumbs up from advertisers

Giving a marketer’s point of view, Sanjay Tripathy, Senior Executive Vice-President, HDFC Life, said, “It depends on the target segment of the brand. Mostly, these shows are watched by the full family and have a pan-India audience appeal, but all mythological shows don’t do well. So, it is important to check the content, channel, airing time and the production value before evaluating the sponsorship.”

Epic, a channel dedicated to mythology and history was launched in the second half of 2014. Epic Channel Head Mahesh Samat could not be contacted for comments at the time of filing this report.