This year, the judging was held over three days – April 29, April 30 and May 1 – at the Nehru Center in Mumbai 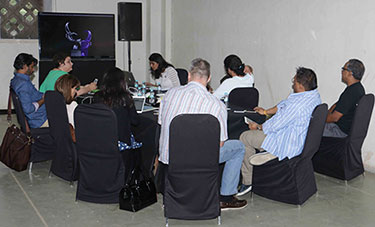 This year, the judging was held over three days – April 29, April 30 and May 1 – at the Nehru Center in Mumbai

Kyoorius, in association with D&AD, held the jury sessions for the 2015 Kyoorius Advertising & Digital Awards over three days – April 29, April 30 and May 1 – at the Nehru Center in Mumbai. For the second year, the Awards have continued with the ‘open jury’ judging process. The jury members included a mix of international and national industry experts.

As is known, last year, Kyoorius opened its doors to professionals, media and the community at large to observe jury members debate over entries as well as peruse some of the most cutting edge work in advertising and digital produced. This year, they have continued the tradition once again and made the sessions more interactive through the Kyoorius FYIdays.

Amid the intensive discussions and debates over the work being judged, there was also some lighthearted banter among the jury members to keep the session interesting and engaging.

Shortlisted works will again be scrutinised before being named as ‘Nominated’ entries. This would be followed by a discussion and the final judging round. The same steps will be followed for Television and Digital advertising as well. The Awards ceremony will be held sometime in June 2015.

Vicki Maguire, Creative Director, Grey London, remarked, “What is interesting is the fact that quality of work has really gone up. The way the work is being submitted shows the passion and dedication that the creators have for the advertising industry. I am really enjoying while judging the work that is being submitted. Also, the entire process of ‘open jury’ seems to be really interesting as it is giving us an option to let the professionals interact and engage with us while judging.”

Tim Doherty, Chief Creative Officer, Isobar China, felt that it was a wonderful way to judge any kind of awards. “The work has been good and encouraging. It shows the way the ad world is growing across the world,” he added.

According to Kunal Jeswani, Chief Executive Officer, Ogilvy & Mather India, there was much width of work and the number of entries was higher than expected. “The quality has been good, but there needs to some kind of effort done towards packaging the whole campaign idea. The idea of ‘Open Jury’ is quite comforting and gives more transparency and fairness. Also, I do not think that the quality of entries is different in Kyoorius, but the number of entries that we received is quite encouraging,” he remarked.

“It is been a great experience judging these awards,” said Andy Sandoz, Creative Partner, Havas Work Club and Deputy President of D&AD. “The work has been quite good, but could be better – not in terms of idea, but the execution. The ‘open jury’ set-up is quite good as it opens up a good amount of opportunities,” he added.

Melanie Clancy, Creative Director, BBDO Proximity Singapore, remarked that the quality of work had been good so far and showed the growing passion of the creators. “We have been enjoying the work that we are witnessing. The ‘open jury’ set-up is also a good thought as it enables more interaction and is different,” she added.

Bobby Pawar, Director, Chief Creative Officer, Publicis South Asia, on the other hand, felt that the quality of work was a mix of good and some that needed a bit of improvement. “But it is a good experience to be a part of this judging process,” he said.

On the contrary, Arun Iyer, National Creative Director, Lowe Lintas & Partners, remarked, “Overall, the work has been a lot more average, which is a matter of concern for the industry and we need to think sincerely about the same. Long-format advertising is one of the trending things in these awards, which seem unnecessary too at times. I think we should not go much behind long-format advertising and move a bit ahead of that.”

Rajiv Rao, National Creative Director, Ogilvy & Mather India, said, “The work is quite decent, but there are a few pieces of work that stand really tall and are out of the box, but at the same time there are some that need much more hard work. So, in short it is a great mix. Honestly, ‘open jury’ is good at its place, but when we are engrossed in judging, it hardly makes any difference whether it is closed or open.”