India’s leading news magazine lends its name to a fresh looking news channel at a time when the new BARC rating system is in place. In the process, Headlines Today has ceased to exist. What impact will it have on the English news genre? BestMediaInfo.com finds out 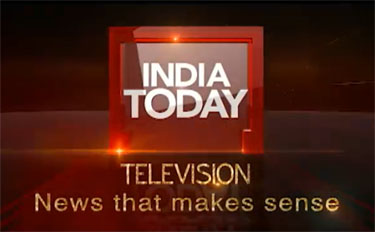 India’s leading news magazine lends its name to a fresh looking news channel at a time when the new BARC rating system is in place. In the process, Headlines Today has ceased to exist. What impact will it have on the English news genre? BestMediaInfo.com finds out

India Today Group roped in Anand Halve of Chlorophyll for the entire branding exercise. The brainstorming sessions came up with four critical aspects that finally went into the making of India Today Television. The first was to bring credibility, zero bias and neutrality to the English news genre which automatically comes with brand India Today. The second essential point was depth that was missing in English news channels. Thirdly, a visually differentiated product was required. Lastly, the channel had to be a source of knowledge. Besides this, a research by MRSS captured the eye movement of viewers.

Based on the findings, it was decided to offer a seamless holistic experience across print, TV, digital, social media and apps under the India Today banner led by Kalli Purie, Chief Synergy Officer, India Today Group.

Launched on Saturday, May 23, 2015 at 6 PM, the channel got Amitabh Bachchan and Priyanka Chopra to voice the channel’s identity. Soon after the launch, #Indiatoday1 started trending on Twitter. Prime Minister Narendra Modi took to Twitter to congratulate India Today Group Chairman and Editor-in-Chief Aroon Purie for the remarkable 40 years of the media group's journey, and conveyed his best wishes for the launch of India Today Television.

What is in a name?

Harish Bijoor, CEO of business strategy consulting practice Harish Bijoor Consults Inc., said, “In many ways, hindsight is the most perfect vision. In hindsight, the most obvious name for Headlines Today is 'India Today Television'. The idea lies in its simplicity. Firstly, it is about pedigree. India Today is the Time magazine of India, and it is the oldest surviving of them all. In many ways, the now defunct Illustrated Weekly of India preceded it, and India Today then took over.”

“I do believe the rechristening will make a difference. It marries the pedigree of India Today inalienably to the television channel. The brand name has India and Today in it. It tells it all succinctly,” added Bijoor.

Bijoor feels that a simple name change will not do much but a name change is always a good start. “I do believe the new name could have been a more 'immediate' cueing name for television as well. It could have been 'India Now' as that is a more immediate-cue led than 'India Today'. 'Now' is about the moment, which is what television is all about, whereas 'Today' is all about the whole day, 24x7,” he said.

Interestingly, the other two main competitors in this genre are positioned by default in this manner. There is Times Now which cues the moment and the immediacy of the medium, and then there is NDTV 24x7 which cues the day at large and its immediacy therefrom.

“I do believe Headlines Today has gone for pedigree more than the immediacy of the medium in its naming stance. I think it has a strong point here, and am therefore am in sync with its rechristening,” said Bijoor.

Right move at the right time?

Bagga explained, “Coming from a news led group, it was logical for us to look at brand ‘India Today’ for a 24x7 news channel. Initially the channel was positioned differently but it evolved over time. Especially in the last one and a half years, we became a more serious player in the English news genre with topmost journalists, entirely new programming and packaging. When we found the needle had started moving, we planned to launch India Today Television to coincide with the launch of BARC’s new rating system.”

Himanka Das, Sr. Vice President – West, Carat Media Services, was surprised why this extension didn’t happen 12 years ago. “Any strong brand in the news domain with credibility in the print space should have seen a natural progression to the television news genre. But the challenge is that they have to keep up to the brand promise to complement each other in their respective domains. If there is a convergence plan of print, TV and digital coming under the umbrella of India Today, then the way forward is a welcome strategic move,” said Das.

Anita Nayyar, CEO, Havas Media Group India and South Asia, strongly feels that India Today is and has always been a strong brand and it will certainly have a rub-off on the television product. She said, “In effect the television product should have been a brand extension at the time of inception. It would have given the product the strength. It will take a bit of time to associate the name Headlines Today to India Today given HLT's long existence.”

Sudha Natrajan, Co-founder of TMC- The Media Consultants, agrees with Nayyar’s view that India Today enjoys a premium brand equity when it comes to general news (in the magazine format), and it should rub off on the television version too. Natrajan said, “The lay viewer perhaps does not know that Headlines Today is a brand from the India Today Group stable. I would have thought that this exercise should have been done several years ago; perhaps it should even have been launched as India Today TV. But in its early days, it was a headlines channel. It gave news in brief, nearly all only in headlines. This changed over time and it has become a regular mainstream English news channel. Hence the relevance of the brand name Headlines Today has ceased to exist.”

Kalli Purie had a big task on her hands to package ‘India Today Television’ in a way that it does not look like old wine in a new bottle. This is where the differentiated content, format and look & feel has paid off handsomely in the seamless transition to a brand name. Purie explained that except the top anchors who are the same, India Today Television is a whole new channel in every aspect. “The workflow on regular basis has completely changed which positions the entire day as primetime, led by Karan Thapar, Rajdeep Sardesai and Rahul Kanwal. With the fact that viewers these days are always exposed to multiple screens, we have turned our channel into a ‘newsplex’ by splitting the screen into four parts that play four different things at the same time,” she said.

Coming to programming, India Today Television is all set to bring back many things such as international news, art, humour and fashion. The channel is also planning to launch a host of new weekend programming which will come from special interest magazines of the India Today stable including Robb Report, Auto Build, etc. India Today Television will soon kick off a show hosted by author Chetan Bhagat to deal with a young and aspiring India.

Given the well-known faces in place for a long time and being distributed along with Aaj Tak which has highest reach among news channels across the country, India Today Television is expected to continue with or grow its dominance. As Nayyar said, “It is very similar to Star News turning into ABP News and has been accepted with ABP Group lending its brand strength to the channel.”

Kalli Purie is confident that the channel will make an impressive impact on audiences as “they are tired of noise” and want to see sanctity in news television and good debates sans drama. “As we aim to add more digital savvy young viewers in the age group of 22-45+ SEC AB in 6 metros with tailor-made content for them, I’m sure of a surge in our viewership,” she said.

Group CEO Bagga claims to have received very positive feedback from advertisers and media agencies for two reasons: one, they think it is very different, modern and contemporary; and, second, the new screen gives them more options to associate/innovate.

Das feels that one has to wait and watch as advertisers’ investments are dependent on viewership trends. “We are in an interesting phase in our television industry with the measurement metric going through change and throwing up initial interesting trends in the news genre,” he commented.

Natrajan agrees with Das. “Increased viewership is the only thing that will make advertisers invest more on the channel,” she averred.

The audience measurement ratings over the next few weeks will tell us if the move has served its purpose. Till then the jury is out.