Crafted by DDB Mudra West, the ‘Shuru Kisne Kiya’ campaign seeks to promote Big Bazaar as the most exciting destination to visit over weekends 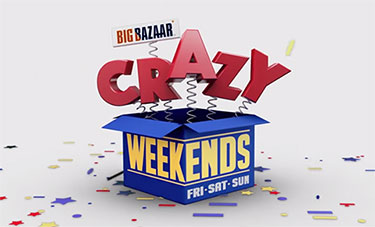 Crafted by DDB Mudra West, the ‘Shuru Kisne Kiya’ campaign seeks to promote Big Bazaar as the most exciting destination to visit over weekends

Big Bazaar has been attracting consumers with its deals and discounts. And what further adds value to their offers is the engaging way in which they are communicated to the audience.

Staying true to the tradition, DDB Mudra West has crafted a campaign – ‘Shuru Kisne Kiya’ – to announce the Big Bazaar Crazy Weekends offer. The campaign has been created by DDB Mudra West.

The brand wanted to capitalise on the entertainment seeking behaviour of consumers during weekends and showcase Big Bazaar as an ultimate weekend shopping destination. The objective was to build anticipation and excitement towards ‘Crazy Weekends’ at Big Bazaar.

The baseline to the idea was drawn from the offers itself. These ‘too good to be true’ offers are so unbelievable that when described, they sound like a lie. This thought paved way for ‘Shuru Kisne Kiya’.

The idea was translated in two ad films with a central storyline of one character talking about the deal he gets at the ‘Big Bazaar Crazy Weekend’. So good is the offer that the other character assumes it to be a fabricated story and retorts with a crazier, imaginary tale. When he first character opposes, the films end with the second character asking, ‘Shuru Kisne Kiya’.

Both the films show bizarre and unbelievable tales like a plane getting stuck in a kite and a cow giving orange juice instead of milk as the response to the friend telling them about the incredible deal he got over the weekend at Big Bazaar.

Commenting on the campaign, Akshay Mehrotra, Chief Marketing Officer, Big Bazaar, said, “Owning the weekend is the most important for successful retail operations. Big Bazaar promises to be the most exciting destination to visit over weekends and we are all excited to get more consumers palpitating with exciting offers in our stores every weekend. This campaign is not only built on offers to fire the market, but also built around many building blocks which make shopping fun at Big Bazaar during weekends.”

Rahul Mathew, Creative Head, DDB Mudra West, added here, “The campaign idea was literally our first reaction to the offers that Big Bazaar proposed for Crazy Weekends. After that, we just had to think up of executions that brought the incredulity to life in an engaging manner.”