Vodafone, Hotstar.com, Kingfisher, Freecharge and Ola are the top five brands on Twitter during the first two weeks of the ongoing IPL Season 8 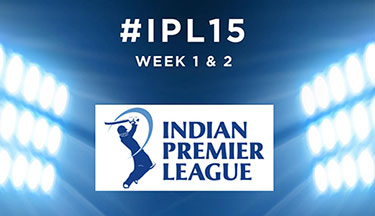 Vodafone, Hotstar.com, Kingfisher, Freecharge and Ola are the top five brands on Twitter during the first two weeks of the ongoing IPL Season 8

The first two weeks of Indian Premiere League (IPL) Season 8 have been exciting from both a cricketing stand point and the action seen from brands on Twitter.

As in the case of the ICC Cricket World Cup earlier this year, a Twitter Brand Engagement Index has been prepared, which features a compilation of a list of the top brands on Twitter this IPL. Using an aggregate of re-tweets, favourites and replies, a Twitter IPL Advertiser Index has been created to acknowledge the top 5 brands that have excelled in the opening two weeks of the tournament.

Following is the Twitter Brand Engagement Index and the details of what each brand did on Twitter:

@VodafoneIn: Vodafone has gained a lot of momentum in the first two weeks of IPL through a contest called #VodafoneSpeedQuiz. With tickets to matches up for grabs, the brand has been able to generate a lot of buzz through this campaign. The contest is a smart way for the brand to build equity on faster speeds, which is core of their new campaign – #SpeedIsGood.

@HotStarTweets: The Twitter account for Star’s Hotstar.com generated a lot engagement around content based on updates from the games, teaser questions, trivia and a competition offering IPL tickets. @HotStarTweets is looking to take the platform’s content digital to greater users and has been able to engage with the online Twitter user using the most topical bits of content.

@KingFisherWorld: The official handle of the good times this IPL, Kingfisher’s campaign idea is ‘Divided by teams, United by Kingfisher’. With this, they aim to bring the followers of all the IPL teams together on a common platform to celebrate and express their love for the game. They are also team sponsors for many IPL teams and are sharing behind the scenes content from these teams. The big hashtag this IPL for Kingfisher has been #UnitedByGoodTimes. This week, the first preview of the new Kingfisher TVC was revealed online with the hashtag #OoLaLaLaLeO.

@FreeCharge: Freecharge is engaging users with a prediction contest this IPL, with prizes up for grabs. Users are asked to predict outcomes of the game and win prizes for correct predictions.

@OlaCabs: Ola is the official cab partner for five of the IPL teams: Chennai Super Kings (@ChennaiIPL), Mumbai Indians (@mipaltan), Kings XI Punjab (@lionsdenkxip), Rajasthan Royals (@rajasthanroyals), and Sunrisers Hyderabad (@SunRisers). With every match, users stand a chance to win two free tickets to the match from the Ola app through the ‘Hit the Match Day’ icon. The brand is building excitement and is increasing engagement around this contest, which is creating a good amount of buzz. They are promoting this activity by using the hashtag #ChaloNiklo.