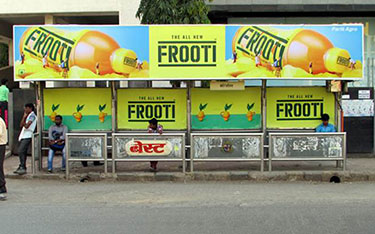 Parle Agro has vested Posterscope with the responsibility for its out-of-home communication in order to introduce a new visual identity for its mango drink brand Frooti. As reported by BestMediaInfo earlier, the brand recently underwent a bold and contemporary after 30 years in the market (http://www.bestmediainfo.com/2015/04/after-30-years-in-the-market-frooti-goes-bold-and-contemporary/).

Since this is a turning point for brand Frooti, which is moving away from its traditional image, the idea was to showcase the new Frooti in a fresh, exciting and playful manner. It had to appear distinguished in a cluttered OOH advertising landscape with its contemporary new look and a bold logo design.

With bold graphics and vibrant colours, the communication focus is entirely on the visuals of the new packs that are depicted to be larger-than-life.

The task put forth by the Parle Agro Team to Posterscope India was to create a buzz about the brand’s new look and boost its on-ground visibility.

Posterscope conceptualised and created an outdoor implementation strategy for Froti and delivered month-long visibility to the brand across over 100 markets pan India. The campaign was not just high impact, juxtaposed against sustained visibility, but also exhibited high cost efficiency.

Using its research study, Outdoor Consumer Survey (OCS), Posterscope conducted a thorough analysis to effectively target consumers, wherein it identified the most relevant touch-points and high footfall locations across market segments. Further, with the help of its proprietary ‘Prism’ suite of tools, Posterscope created a mix of impact, reach, frequency and intrigue by using a combination of large and small format media units. Media placement was done at key high traffic locations, arterial roads, congregation points, product consumption locations, hangout places and transit places. While the largeness was provided through billboards, the differentiation was created by the right kind of media mix that encapsulated more than 20 different outdoor media formats, including street furniture and transit media.

To stand out and create differentiation in the cluttered metro markets, Posterscope created media clusters. For this, a combination of multiple media touch points was rolled out within close proximity to create Frooti Life Zones.

Speaking about the campaign, Nadia Chauhan, JMD and CMO, Parle Agro, said, “We are employing a differentiated marketing strategy with the entire brand revamp and new positioning for Frooti. With our new campaign, we want to make the brand relevant and appealing to consumers across generations and build higher aspirational values around it.”

Commenting on the association, Haresh Nayak, Regional Director, Posterscope APAC, said, “We are glad to be associated with the brand-revamping exercise of Frooti, ensuring the creation of high impact visibility with the wide spread outdoor campaign.”

The challenge for the Posterscope team was to get the campaign live almost simultaneously across a humungous geographical spread of metros, state capitals, Tier 1 and Tier 2 towns, tourist locations and national highways. Additionally, there were multiple creatives manifesting ‘The Frooti Life’ that had to be used prudently to offer visual freshness to the campaign.

Consequent to the task undertaken, the result was an extremely visible outdoor media campaign that was delivered seamlessly across 100+ markets and entailing nearly 2,000 media units.