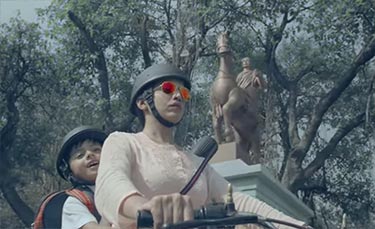 Following its merger with ING Vysya Bank, Kotak Mahindra Bank (KMB) is now India’s fourth largest private bank. This merger has increased KMB’s geographic footprint across the country, with over 1,200 branches and 1,900+ ATMs across 643 locations.

To highlight its presence across a significantly larger geography that includes smaller towns and cities such as Pehowa, Chaibasa, Changanassery, Guntur, and Duliajan, KMB has rolled out a campaign, titled ‘Kona Kona Kotak’. The campaign has been created by Cartwheel.

A TVC currently on air depicts the diversity of the people across the country, but who share a common bond – the will to make it big, and this will is stronger than ever. Be it a young architect and mother in Jhansi, who rides a bike to the construction site or the ‘Spice Boys’ of Guntur, who handle red hot chillies and break dancing with equal panache or an enterprising Udupi restaurateur offering Mexican fusion fare – the TVC captures a vibrant India itching to touch greater heights. The campaign showcases how Kotak is a partner in the transformation of this new and emerging India.

Commenting on the campaign, D Ramakrishna, Founder, Cartwheel, said, “The essence of the campaign is captured in the slogan ‘Ab kona kona Kotak’. Kotak is now there from Bellary to Bathinda, and Alwar to Asansol. But more than the physical presence, it’s being a part of the resurgent spirit of these places that is a matter of great pride. A spirit that is expressed through the resilience, ambition, creativity, and enterprise of its people.”

The high intensity campaign is planned across TV, print, outdoor, radio and digital.

The TVC and OOH capture the visual diversity, changing attitudes and emotions of a contemporary India, with a young and vibrant touch. The TV and outdoor campaigns have been created by Cartwheel. The media plan covers leading GECs, business, English and regional news channels, whereas the outdoor communication is spread across 75 cities.

Meanwhile, the print campaign highlights how the country’s fourth largest private bank is well poised to contribute to India’s growth story. The corporate print campaign has been conceptualised by Alok Nanda & Company. The print ads are covered in mainline English, business and regional newspapers.

Alok Nanda, Creative Director and Founder, Alok Nanda & Company, commented, “Kotak’s momentous merger was inspired by the great energy and optimism in Indian business today. It felt right to draw this connection strongly in our campaign.”

The radio ad emphasises the reach that Kotak has now achieved, and how it is becoming a part of one’s everyday life.

The campaign’s hashtag, #KonaKonaKotak, has been encompassed in all communication to leverage conversations on social networking sites. A contest, called #KonaKonaKotakhunt, on Facebook and Twitter has also been designed to engage followers with a quiz-type format that is about unlocking cities/ towns where Kotak is now present.