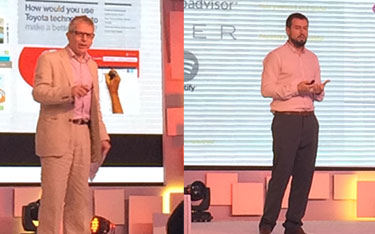 Goafest 2015 continued with its Knowledge Seminar on day two of the festival. ZenithOptimedia’s Guy Abrahams took the stage and noted that marketers believe that marketing has changed quite extensively in the last few years than what it had evolved in the last five decades.

He added that the marketers should move from just a 360 degree approach to a ‘365’ communication approach. “The simple reason is that the way we have been taught communication has been based on what the brand wants to say, rather than what the consumer wants to hear. This worked when media was scarce and the brand controlled messaging. In our abundant media world, the consumer is taking control of their messaging. So, at ZenithOptimedia, we believe that we need to turn conventional wisdom on its head and approach marketing communication from a completely different angle,” he added.

He believed that with so much evolution, conveying a brand story has become not so important rather, today it is important to concentrate on how you can reach them and through various media platforms. Building ecosystems of experiences and disseminating the message that consumers want to hear across all forms of media. According to him, integrated 360 marketing campaign built around advertising idea is not the best approach in a digital age, which is why one should be building marketing ecosystems designed to driving sales 365 days a year. “Build around brand assets and experiences that consumers choose to engage with across paid, owned and earned media and how you can make the brands you work with 365,” Abrahams added.

Since consumers are constantly connected on their mobile and are engaging very minute, Abrahams felt that it was important to believe in ‘real time marketing’ and the opportunities that it provided. “We are moving on from a model based control to one based on orchestration,” he noted.

In a world, where advertising is getting easier to avoid, there is a value exchange where consumers will give attention, engagement or action in exchange for relevant brand experiences. Adding further, Abrahams said, “The brand purpose is your brand’s mission in life. It has to not only resonate with consumers, but be authentic for the brand. The creative agencies love talking about brand purpose because it produces better advertising, but the brand purpose allows you to do so much more. It lets you go beyond product messaging and helps you provide a service that consumers want. It defines the entertainment, utility, education and reward, which you need to provide at each point of the journey that consumers are willing to give you value for. Brand purpose is the bedrock of your 365 consumer experience.”

Giving a six-point action plan for the brands to benefit from the 365 thinking, he said, “Firstly, mine insights from new sources, which means that it is important to shift from reported behaviour to actual behaviour. Secondly, focus on the consumer journey and experience as reality mining helps us systematically understand the requirements for different consumers at every stage of the journey. Third is that brands need to change their audience perspective, because the 365 and modern media urge us to have a look at audience in a completely new light.”

Continuing further, he said, “Next, brands and agencies need to embrace a new kind of creativity. Following that, the brands need to use a purpose to build bigger, longer ideas and not short format advertisements. Lastly, it is important to move to an asset based programme, thus making your assets a hero and not a sideline.”

‘Creativity in real time is important’

Taking the Knowledge Seminar ahead, Razorfish’s Jonny Stark spoke on how creativity in real time is important with the changing face of digital. He felt that India is going through very exciting yet challenging times. Exciting in terms of changing consumer preferences and challenging for the brands, which need to keep up to the need and demand of the evolving consumers. “I am excited to be part of the India transformation story along with Razorfish India and looking forward to interacting with some of the best minds in the country at Goafest,” he said.

Stark added, “Social media marketing is not new anymore, it has been around for a while. With people being on their devices 24x7, social media has gone beyond the realms of just Facebook. It is a real opportunity for both brands and the consumers to build strong engagement.”

Listing a few challenges, Stark mentioned that with over 7 trillion digital advertisements being served in Europe last year, it is a bit disappointing to know that the engagement rate was less than 0.1 per cent. As per Comscore data, there is a very small amount of people who actually pay attention towards the advertisements on the digital medium, hence engagement is the only option for the brands to create a buzz among their target audiences.

While summarising the problems that the marketing and advertising world faces, he said, “We’re still selling, promoting and annoying people. But we convince ourselves that we’re having a conversation.”

The second day ended with the last session by Bookmyshow’s CEO, Ashish Hemrajani, who spoke about how the online ticketing industry has grown over the years. He also highlighted how the consumers accepted Bookmyshow and added value to the table. He said, “When we started the idea of booking tickets online for a movie or may be a theatre show, it was very niche and was untouched in India, though it was doing quite well internationally. But over the years, with our right vision and mission, we have today managed to carve a strong place in the industry and among our audiences, thus registering substantial amount of growth, both in terms of adding more consumers every day and revenue.”