The Head of Agency, APAC, Facebook made a strong case for Facebook as a platform to create robust targeting & engagement by brands, while speaking at Goafest 2015 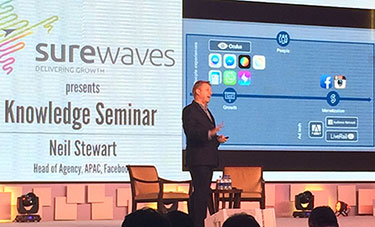 The Head of Agency, APAC, Facebook made a strong case for Facebook as a platform to create robust targeting & engagement by brands, while speaking at Goafest 2015

Facebook today has become every brand’s priority. Keeping the same in mind, day two at Goafest 2015 saw another packed house for Neil Stewart, Head of Agency, APAC, Facebook, who pointed out the various facets of how the social network is being accepted worldwide by consumers and the brands.

“Facebook turned 11 this February and has been receiving tremendous response from the last few years. The initial years were quite challenging for Facebook, but as time preceded, Facebook carved its place among majority of audiences in India and around the world,” Stewart pointed out.

He informed that more than consumers, the brands had started optimising the advantages of Facebook. “Digital is growing and evolving at a rapid pace, which has indeed flipped the game for Facebook. The time spent on Facebook is increasing day by day. This is giving an immense opportunity to brands to engage with their target audiences,” he added.

He pointed out that today people were consuming majority of the content at a rapid pace and interestingly, on mobile. Elaborating on that, he added, “The way the world is transforming towards mobile, it seems that mobile is going to be the way forward. Consumers are constantly engaged with their mobiles, surfing various applications, but interestingly, they spend majority of their time on Facebook and Instagram.”

These statistics indicate a clear vision and mission for the other brands in terms of optimising the growing evolution of Facebook. “Facebook’s mission and vision is just to build engagement and empower sentiments to engage with their peers or friends. Having said that, Facebook is all about engagement,” he added.

Stewart further mentioned that Facebook was earlier perceived as a platform only for making a number of fans, registering number of ‘Likes’ and creating sentiments, but later, when brands began realising its importance, Facebook was acknowledged and is today one of the most preferred medium by brands to reach out to their target audiences.

“Today, Facebook is beyond Fans and Likes and has evolved to brand building, building awareness, increase in online sales, promotional activities and launching a new product. Facebook has helped a lot brands create a strong impact on their target audiences by either creating engagement or giving a personalised experience,” he further said.

Concluding his session, Stewart gave a suggestion to the brands with regards to utilising Facebook in the best possible way, which is to “use robust targeting by disseminating right content for a right set of audience”.