Goafest 2015: ‘Digital will soon take over traditional form of advertising’ 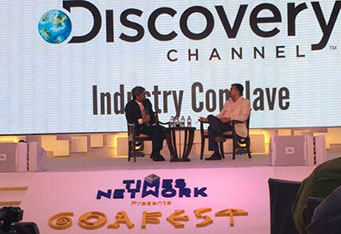 Goafest 2015: ‘Digital will soon take over traditional form of advertising’

As is the convention, the tenth edition of the annual Indian advertising festival, Goafest 2015, began with the Industry Conclave. The conclave, presented by Discovery, featured brand experts sharing their views on the state of the advertising and marketing industry, and the various challenges facing them in a highly connected world.

Earlier, the opening address for this year’s edition of Goafest was presented by MG Parmeshwaran, President, AAAI. “This is the tenth year of Goafest and is the biggest one of all the years. The ten years have been full of innovations and experimentation. We have grown a lot over these years,” he remarked.

Stressing that the industry is witnessing a constant change, Pepsico India’s D Shivakumar said, “We need to re-think marketing in a world impacted by media, technology, fragmentation and complexity.”

Talking about the big evolution from analog to digital, Shivakumar believes that there has been a big evolution in terms of screens. “We have grown from Cinema to Television to Laptop to Phones and to Retail. Mobile screen will probably be the biggest screen going further down the line,” he added.

Taking the discussion on to the 'mobile first digital world' space, he explained that with growing usage and acceptance of mobile phones and Internet, Internet advertising is second  to Television advertising and was expected to take over the traditional form of advertising very soon.

He observed that 45 per cent of the world’s population is aged between 16 and 24 years, and everyone of that age wants to be famous online by consuming and sharing content that seems important to them. “This is indeed is making difficult for brands to be part of the content story as the consumers are able to share content for free,” he remarked.

Pointing out that content creation will be a sort of collaboration between broadcasters and the agencies; he added that 'Big Data' is the next big thing to re-think on. “We have a lot of data available but the concern is to utilise the same in the possible way,” Shivakumar noted.

Summarising his presentation, Shivakumar said, “Mobile, in 2015, will be big and content will be the king. Digital will soon take over the traditional form of advertising.”

United Spirits’ Anand Kripalu stressed the fact the world is witnessing a lot of changes and evolution year on year. Stating few key transformations, he observed, “The clients and the agencies both are getting pressurised looking at the change in the consumer behaviour.” He chalked out a vision of the future anchored in our roots.

1. On ‘transformation towards trusted branded conversations to content’, he said: “There needs to be a shift from controlled content messaging which was made primarily for television and adopted for media to branded content, two way conversations made for multi-media.”

4. On ‘transformation towards real time engagement with the consumers’: “Ideas can come from anywhere, everywhere and any time. It is important to operate in real time. There should not be a specific time allotted for a campaign.”

5. On ‘transformation towards a diverse and multi-disciplinary talent profile’: “Hiring talent is the biggest step for any company. Young talent is very different to the leaders in organisations these days hence there should be clear focus on hiring people which are multi-talented and can handle quite a few things.”

Concluding his presentation, Kripalu stated that there is change happening in a big way and one needs to innovate to stand ahead of the curve. “We need to be one step ahead of the consumer, which indeed requires a clear vision and mission,” he summarised.

Nestle South Asia’s R Chandrasekar started his presentation talking about the value of adopting meaningful change at Nestle. Stating the five fundamentals that Nestle holds close, he said, “It is important to bring alive the corporative promise; Secondly, it is about people. Then, the message quality is what holds more importance that quantity. Fourth is where engagement is just an enabler. Finally, safe is not safe in today’s reality.”

He explained the above mentioned fundamentals by giving various examples of their advertisements like Nescafé's #itallstarts; Mummy's Khushiyon ki recipe; Alpino's love is to share and few more.

Chandrasekar believes that it is important to challenge when it comes to brand advertisements, as safe creativity is boring, flat, fray and uninspiring.

Standard Chartered Bank’s Sanjeeb Chaudhuri pointed out the changes in today's client and agency relationship. He said, “Earlier changing an agency used to be like a divorce. A century ago a client-agency partnership lasted 15 years. Then, eight years ago it came down to five years, and now it has gone down to three years or less now!”

While stressing on the way client-agency relationship are deteriorating year by year, he explained, “I believe that shorter tenures are not good as they don’t help in creating good working relationships and good product building. Another disadvantage is that today client’s work with multiple agencies like a different media agency and a different creative or any other agency.”

He believes that with online proliferation, there is an increase in the number of opportunities for communication partners, which the agencies are yet to understand, and felt that a brand or a client needs to have an end-to-end communication and specialist perspective.

Goafest 2015: Lodestar UM wins maximum Gold at Media Abbys Goafest 2015: ‘The quality of work has raised the bars this year’