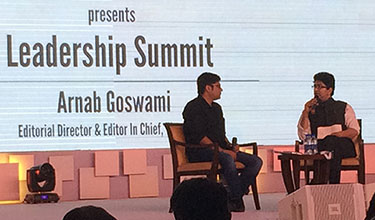 The second day of Goafest 2015 started with one of the most popular faces of Indian television addressing a packed audience with his thoughts on the way journalism was and is now. Arnab Goswami, Editorial Director and Editor-in-Chief, Times Now, is known for his opinions, and he lived up to his billing by making a case for ‘relevant journalism’ and importance of taking a stand.

He pointed out a few dilemmas on how journalism is being perceived in today’s time. Goswami presented his views on ‘News for a New Media’. Marking his opinion about supporting ‘relevant’ journalism, which involves 'old’ journalism rules, and the importance of taking a stand on issues that matter, he stated, “Today, the way journalism is being perceived and pursued has changed and evolved to a larger extent. I received a very weird piece of advice when I started my career 19 years ago, which mentioned that a journalist should not be opinionated. But that is not true, because until and unless a journalist will not have an opinion, he or she will not be able to follow or cover the story the way it should be covered. Therefore, journalism is about taking a stand.”

Goswami believed that sensationalism for a cause was right. Stating an example of Prince’s news story that became the entire nation’s concerned in 2006, he said, “It was not sensationalising, but taking the news close to the viewers with an aim to question the concerned authorities about their carelessness. It was a 60-feet deep hole and if media would not have converted the same, the authorities would not have addressed the issue as they did, thus leading to his rescue.”

Stating the dilemma further, he added, “During that time we heard comments like Times Now is going on the lines of a Hindi news channel, but the truth is that we are a media channel and a news story is a news story irrespective of a Hindi or an English style.”

“If this is sensationalism, then I plead guilty of taking smallest of news to the people,” he added. Stressing his next point, Goswami said, “It is important to get involved to investigate and showcase the authentic parts of the case. If that is activism, then I believe we need activist journalism in this country, not on political issues but on relevant social issues.”

Sharing the story that was covered by Times Now on a rape case that took place in Uttar Pradesh, wherein a domestic helper was raped by an MLA of the BSP party, he said, “It was an important issue because when the girl filed a case, the police rather than registering her complaint, filed numerous charges on her and imprisoned her. If that was media’s activism, then it is important, because had we not raised the issue, the MLA would not have been behind bars.”

Goswami pointed out another charge that Times Now faces, which is that “the channel does not cover the news the way other media does”. To this, he said, “Well, that is not true. Let me give you an example. On the day when Bollywood actor Sanjay Dutt was being taken from the prison from Mumbai to Pune, almost all the channels, including Times Now, were busy telecasting images of him waving to the cameras. What shook me off that day was a call. On the same day, I received a call from an unknown person in Bangalore, whose friend, who was an army officer, was killed while fighting on the border.” That man pointed out to Goswami that barring Doordarshan, no TV channel was present at the funeral of his friend, Col Vasant Venugopal. He stated, “Now, that was something that shivered me to the core and made me realise that this is not what journalism is and we need to move beyond just Bollywood stars and acknowledge the real stars.”

Focus should be on engagement

Following Goswami, the stage was taken over by motivational speaker and author Chetan Bhagat, who pointed out various ways of book marketing and targeting the right set of audiences. He said, “Whether it is writing a book or creating an advertisement, the focus should be on engagement. One needs to forget about selling the product, but should worry about involvement.”

Bhagat believed that marketing today had evolved a lot and one needed to be really careful in terms of strategising their marketing plans. He said, “Social media is really important for a lot brands to create awareness about their product and that too in a creative and integrated way, hence utilise the advent of social and create an impact.”