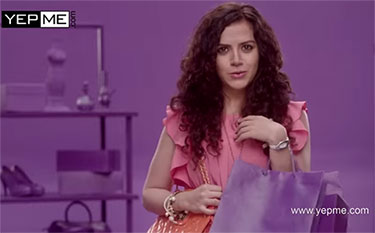 Yepme.com has rolled out its new brand campaign centered on the theme – ‘Fresh Fashion, Fresh Look’. The campaign connects Yepme’s ‘fresh’ credentials with the ‘fresh new perspective’ on clichéd ways of doing things.

The 360-degree campaign includes a series of 10 films that highlight Yepme’s focus on #freshfashion. The campaign is currently live on all the channels broadcasting the ICC World Cup live through the Star Sports network and will unfold along with the remaining matches of ICC World Cup 2015. This campaign works towards Yepme’s mission to democratise fashion in India for the style conscious men and women in the 20-29 age group.

The online fashion brand has also got on board former MTV VJ and actor Rhea Chakraborty as its brand ambassador for the new brand campaign. A special ‘Rhea collection’ line of apparels and accessories has been launched, where she is sporting in the videos. Chakraborty made her feature film debut with ‘Mere Dad Ki Maruti’, produced by Yash Raj Films’ Youth Films Division, Y-Films and stars in Y-Films’ next, ‘Bankchor’.

The tongue-in-cheek campaign, also being conceptualised and produced by Y-Films for Yepme, showcases Chakraborty offering a ‘Fresh’ take on some of the ‘same old’ lines people say, be it Shopaholics, Social Media addicts, Fashion Designers, models or Moms of Single Girls. She brings the ‘freshness’ into the campaign with her reactions that outline Yepme’s ‘Fresh Fashion, Fresh Look’ attitude.

Commenting on the campaign, Anand Jadhav, President, Yepme.com, said, “The campaign about a fresh take on various aspects of our lives is exciting and very new in its thought. We are constantly introducing a fresh new collection every week with a large number of new designs and capturing trends that are catching the fancy of the Indian youth. The whole campaign is about ‘No more same old, Go Fresh, Go Bold’. This fits in well with the very DNA of the Fresh Fashion campaign of Yepme. Rhea is a great fit for this idea to be brought out alive. We are very happy to have her as our brand ambassador to deliver a fresh look consistent with our Fresh Fashion campaign.”

Ashish Patil, Business & Creative Head, Youth Films, Talent Management & Brand Partnerships at Yash Raj Films, added here, “It’s a joy to work with partners who not only give you exciting briefs, but also push you to do great creative work. So, while it was a challenge to turn around such a large campaign – with 10 different films, almost 40 different edits, multiple set-ups – in record time for the World Cup, we could pull it off, thanks to the Yepme team backing us with the right resources to make it happen. It also helped us demonstrate the 360-degree capability of YRF Talent to provide end to end solutions – from conceptualising a campaign, providing the right talent to executing, deploying and amplifying it.”